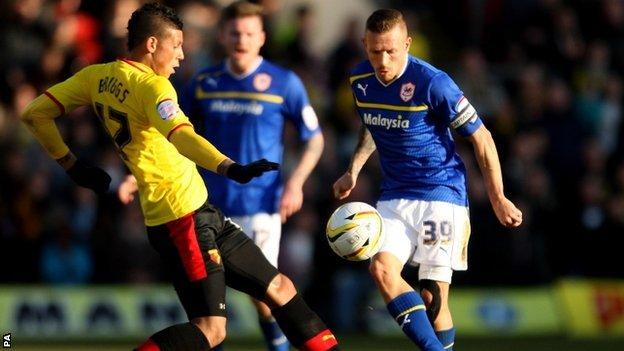 Cardiff City edged towards promotion to the top flight for the first time in 51 years thanks to a hard-earned point at promotion rivals Watford.

The Championship leaders had goalkeeper David Marshall to thank for denying Troy Deeney with an excellent save.

Deeney missed another chance for the Hornets, who stay third, but Manuel Almunia frustrated Cardiff by keeping out Kim Bo-Kyung and Joe Mason.

Hull City's 1-0 win over Middlesbrough earlier in the day left Watford needing a win to keep their push for automatic promotion on track.

But Gianfranco Zola's side, now without a victory in their last three home games, lost ground in the race to finish in the top two after a resilient Cardiff performance.

Bluebirds boss Malky Mackay was forced to endure some anxious moments on his return to Vicarage Road.

But the former Watford player and manager saw his side dig deep to secure a result, in front of watching England manager Roy Hodgson.

There was little to choose between the two teams in a cagey first-half, with chances few and far between.

At the other end Deeney, who has scored 16 league goals this season, spurned a glorious chance after Matej Vydra's knock-down.

Cardiff's cause was not helped by the loss of Matthew Connolly to injury with the game just 10 minutes old, Kevin McNaughton coming on at right-back.

And McNaughton made a vital headed clearance to deny Ikechi Anya a goalscoring chance.

Watford pressed after the break and Deeney thought he had produced a breakthrough with a glancing header that Marshall did well to claw away on 55 minutes.

Cardiff were happy to soak up the pressure from the home side although they had a chance to secure all three points through Mason.

The former Plymouth player was clean through on goal after racing clear of Joel Ekstrand.

But former Arsenal keeper Almunia held his nerve to save well.

Cardiff now have three successive home games, starting at home to Barnsley on Tuesday, and could seal their place in the Premier League before the next away game at Burnley on 20 April.