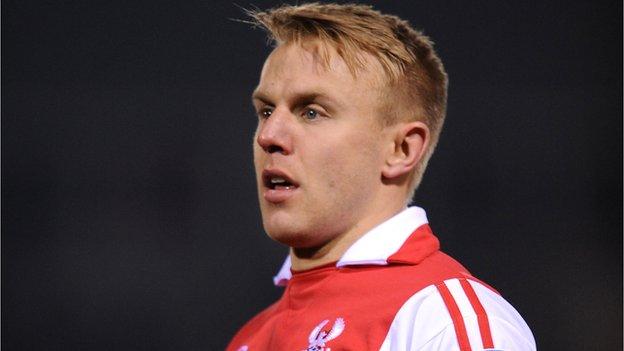 Michael Gash set up Jackman to fire home the opener into the bottom right corner on 27 minutes at Aggborough.

But the Harriers then made hard work of it against relegation-battling Lincoln.

It took two goals in the last 10 minutes from skipper Kyle Storer and full-back Lee Vaughan to secure a third straight win for Steve Burr's men.

Storer ran on to Marvin Johnson's through ball to lift the ball over Imps keeper Paul Farman from a tight angle to make the game safe 11 minutes from time.

Vaughan then put the game beyond doubt in the final minute of normal time when he fired across the face of goal to find the bottom corner.

Harriers' victory, which came at the cost of injuries to Danny Pilkington (hamstring) and Keith Briggs (suspected broken hand), keeps them a point clear of second-placed Mansfield Town, who won 4-0 at Barrow.

But Mansfield, who have two games in hand, now play twice - at home to Macclesfield on Tuesday night and at Braintree next Saturday (15:00) - before the Harriers are next in action in their televised teatime kick-off at Wrexham (17:15 BST).

If the Stags were to win both games, then the Harriers would have to win at the Racecourse Ground next Saturday evening to keep their title hopes alive.

Lincoln's first defeat in five matches leaves them still under threat of a second relegation in three seasons - just two points clear of the drop zone, with three games left.

"It was nice to see other members of the team getting on the scoresheet. All three goals were quality, clinical finishes.

"Danny Jackman's been threatening to do that ever since he got here.

"Mansfield have had a good win at Barrow, but all we can do is try to win as many games as we can.

"We have to go to Wrexham next Saturday and get three points."

"We came in with a game plan to keep it tight, which I thought we did well and in the second half, until the second goal which killed us off, I thought we were in it. If we'd got a goal I could see us pushing on.

"As I've said before, I think it will go down to the wire but if we keep playing like that, where we can cause the team at the top of the league to wobble, then we've come a long way.

"They're riding high, trying to win the league and they're at home so I thought we acquitted ourselves pretty well but I'm disappointed that we conceded three goals."