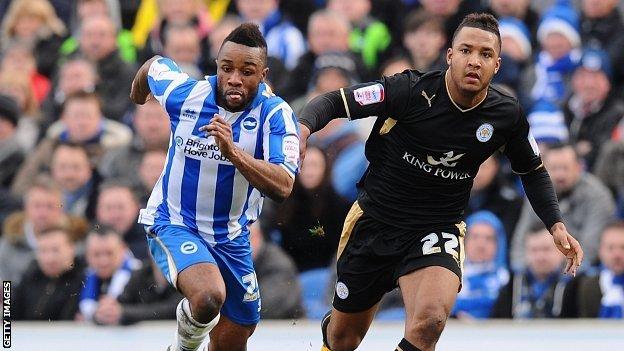 Kazenga LuaLua's late goal secured Brighton a draw with Leicester that keeps the Seagulls in the Championship play-off places.

Matty James's powerful shot looked to have given Leicester a win that would have seen them leapfrog their hosts.

The visitors could have scored a second, but Liam Bridcutt blocked a fierce strike from Chris Wood.

But LuaLua, an early substitute for the injured Will Buckley, cut in from the left to equalise with two minutes left.

Leicester have now won only one of their last 12 games, a run that has seen them slip from second to seventh.

Despite their poor form, the Foxes started strongly with Andy King heading wide and Michael Keane volleying over the bar.

But on the half-hour Brighton almost went ahead with their first real chance as Danny Drinkwater's goal-line clearance denied Inigo Calderon.

Leicester's pressure finally told after 73 minutes when Brighton failed to deal with Paul Konchesky's long throw and the ball fell to James, who switched feet before drilling it into the net.

But LuaLua's late intervention ensured the points were shared.

"We definitely deserved to take a point from the game. No doubt.

"LuaLua's goal could be a very important one for us. We've drawn our last three games and I would say we need to win three of our last five matches.

"It'll be a good number as teams behind us will need to win four. It's in our hands. We can't blame anyone if we don't do it."

"We've played well and got some good results for the vast majority of the season. As a manager you have to take some criticism.

"But we've got five games to do enough ourselves. We've still got to play teams around us.

"One win in 12 games is not promotion form, but we've got a great opportunity to do it. We've got five games left and it's all in our hands."