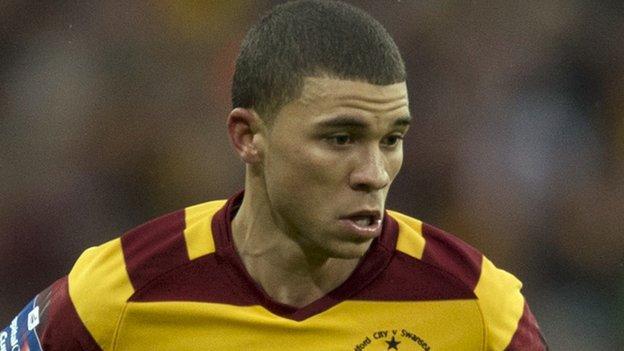 Bradford City top scorer Nahki Wells struck the only goal as the Bantams stepped up their play-off bid with victory over third-placed Northampton.

Wells hit his 19th goal of the season when on-loan Nathan Cameron failed to deal with Garry Thompson's long ball.

Ben Harding had Northampton's best effort, but his shot was superbly saved by a diving Jon McLaughlin.

Eighth-placed Bradford climbed to within two points of the play-off places - with a game in hand on seventh-placed Exeter.

"It's a tough place to come. They're a good side, but so are we - and both goalkeepers kept their teams in it today.

"It's a horrible mistake that has cost us but it's made by two very good, young players who are going to have very good careers at the top end.

"Thank you to our fans for supporting us again and please don't lose faith with us because we will win away from home.

"I genuinely think it's meant to be for us to go up."