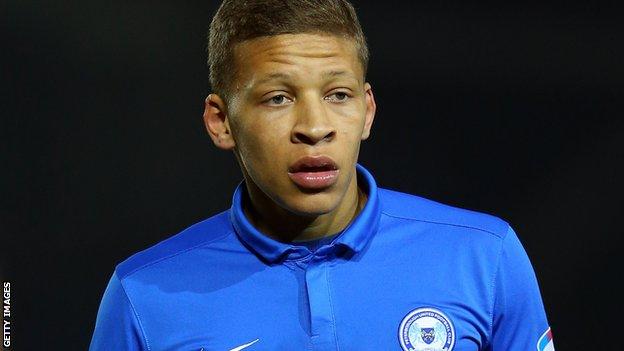 A late equaliser from Dwight Gayle secured Peterborough a crucial point at Huddersfield in a Championship relegation tussle.

Neil Danns gave Huddersfield the lead with a goal from close range before Lee Tomlin drove home to level.

A Murray Wallace header midway through the second period put the hosts ahead but Gayle nodded in from a corner to snatch a point.

Huddersfield are 21st with 48 points, one ahead of 23rd-placed Peterborough.

Both teams started the day in the relegation zone and a win for either would have been a big help to their Championship survival chances.

Huddersfield came into the game on the back of two defeats but made a bright start as Sean Scannell dragged a shot wide, and Oliver Norwood sent a 30-yard effort just off target.

Just one point separates Wolves in 19th from Peterborough in 23rd. Second-bottom Posh, on 47 points, would have finished comfortably clear of relegation with the same haul last season.

Peterborough were dominant in possession but failed to convert that into chances, with a Nathaniel Mendez-Laing shot that was blocked by Peter Clarke their only effort of note before half-time.

Instead, it was Huddersfield who opened the scoring in the 41st minute as Norwood's powerful 30-yard drive was spilled by Peterborough goalkeeper Robert Olejnik and Danns was on hand to smash the rebound into the net.

Olejnik did well to stop the home side adding to their lead early in the second half when he punched clear a Scannell shot.

It proved an important save as Peterborough equalised in the 50th minute. Mendez-Laing was allowed to run into the area and cut the ball back for Tomlin, who struck from 12 yards.

Mendez-Laing then shot over the bar just before the hour, but it was Huddersfield who regained their lead midway through the second half when Wallace headed in for his first goal in English football since joining from Falkirk last year.

It looked like that would be enough for Huddersfield to take all three points but Gayle's weak header four minutes from time ensured Peterborough left with a potentially vital point.

Huddersfield manager Mark Robins: "It's a point gained and the positive is that we move up the table.

"We are devastated not to win the game but we fell into the bottom three and we've only been there a week.

"There are going to be many more twists and turns before the end of the season."

Peterborough manager Darren Ferguson: "We let our standards slip today and the players know what I think.

"We came here to win the game but we played with a lack of intelligence at times and I am disappointed we didn't get the three points.

"This will go all the way to the last game, I'm convinced of that."