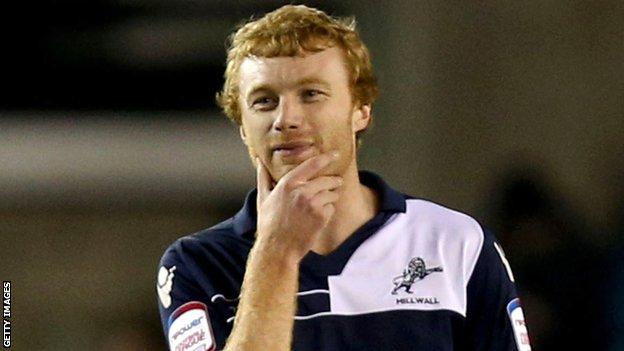 Wes Thomas put the hosts ahead four minutes into the second half with a low shot on the turn.

But Millwall, the better side for much of the game, deservedly levelled when Taylor fired in from Rob Hulse's cross.

Sean St Ledger then struck the woodwork with a header for the visitors, but Birmingham survived to secure a point and edge closer to Championship safety.

Lee Clark's side are 13th with 53 points, six clear of relegation, while Millwall are 15th on 52 points.

Lions given the Blues again

Millwall host Sheffield Wednesday next Tuesday, before they head to Wembley next weekend for their FA Cup semi-final against Wigan.

They are hitting form just at just the right time, having arrived at St Andrews with three wins from their previous four games.

And they felt they should have been ahead in the first half of this match when Taylor's shot was poked into the net by Richard Chaplow.

The effort was initially flagged offside before referee Keith Hill ruled it a goal, only to change his mind after discussions with his assistant.

Birmingham quickly sought to take advantage of that let-off as Thomas forced a good save from David Forde, and the Millwall keeper was again called on to deny Ravel Morrison early in the second half.

There was little Forde could do though when Birmingham opened the scoring in the 49th minute, Thomas capping a fine move by turning inside the area and sending a low shot into the back of the net.

Birmingham failed to build on that, however, and instead Millwall looked the more likely to score the next goal.

They did just that 20 minutes from time when Taylor fired beyond Birmingham keeper Jack Butland after Hulse had got away down the wing.

St Ledger headed against the crossbar and substitute Martyn Woolford shot just wide, but Millwall could not find a winner.

Birmingham manager Lee Clark: "The players are doing really great and we are proud of them but we have got to be more ruthless and more professional.

"At times you could see we were young and naive. Their power and physicality brushed us aside at times."

Millwall manager Kenny Jackett: "It is in our own hands. We have games in hand. With five of the seven at home we have to take full advantage of this situation although I know our home form has not been great this season.

"Since the [FA Cup] quarter-finals we have played four games. Three have been away and we have won two and drawn two.

"It has been a good response from the players."