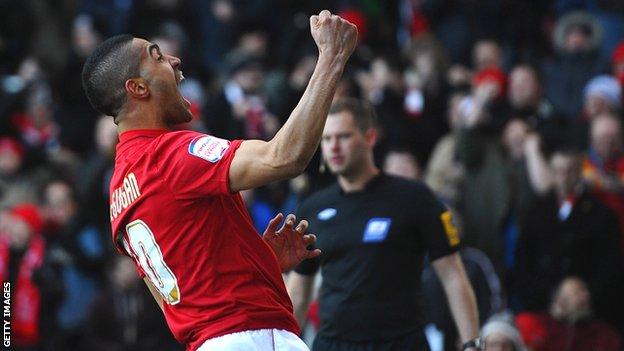 Ludovic Sylvestre put the visitors ahead against the run of play with a strike into the top corner.

But Isaiah Osbourne was sent off for a late challenge on Greg Halford, leaving his side with 10 men for 30 minutes.

McGugan had scored from the spot deep into stoppage time in Easter Monday's 1-1 draw at Burnley.

His successful spot-kick this time means Billy Davies's side remain fifth in the table after three straight draws, while Blackpool are 16th - only three points about the relegation zone.

The pattern of the first half was set early on as Forest controlled possession and Blackpool created chances on the counter-attack.

Blackpool have won only two games away from home in 2013

Nathan Delfouneso saw a curling shot from the edge of the box come back off the bar and Blackpool took the lead with their next attack.

Sylvestre collected possession on the left before unleashing an effort beyond Karl Darlow into the far corner.

Forest then abandoned their passing when Halford's long ball was headed narrowly over by Darius Henderson.

After half-time, Elliott Ward headed over from a corner and Chris Cohen tested Matt Gilks from the edge of the area.

When Osbourne was shown a straight red card, Davies responded by bringing on McGugan - who had rescued a point at Burnley - and he went close three times within five minutes.

Strikers Dexter Blackstock and Billy Sharp were also brought off the bench by Forest, but it was McGugan who levelled after Cox was brought down.

Forest were given seven minutes of stoppage time to find a winner, but Paul Ince's men held on for a point.

"It was a frustrating afternoon for us because of the type of game plan our opponents had.

"But it is credit to our players that teams are coming here and sitting so deep - they are aware of the attacking threat we have.

"We needed to be a bit more patient and increase our quality in the final third. We were pedestrian in the first half. But we are sitting in the top five, we are unbeaten in 10 games and with five games to go are sitting in a very good position."

"We were robbed... totally robbed. It was a poor decision [Osbourne's red card] from the referee and I thought he had had a good game up until then.

"I know officials have got the hardest job in the world but I just think at this stage of the season when so much depends on going up and staying down, referees have got to get the big decisions right.

"The linesman has flagged for a free-kick for us and Isaiah has been pushed into the other player. The red card was unbelievable. Up until then we had looked comfortable and Forest had run out of ideas but it gave them a lifeline."