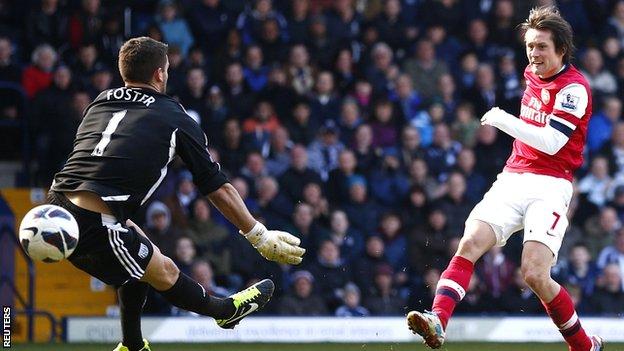 Tomas Rosicky scored in each half as 10-man Arsenal withstood a West Brom fightback to move above Chelsea into fourth place in the Premier League.

Rosicky cleared a Claudio Yacob effort off the line before putting Arsenal ahead with a powerful diving header.

The Czech midfielder struck again after half-time, drilling into the bottom corner at the second attempt.

James Morrison converted a penalty as Per Mertesacker was sent off for a foul on Shane Long, but Arsenal held firm.

They go a point clear of Chelsea in the final Champions League spot, but have played a game more than the Stamford Bridge club.

Rosicky on the mark

The Gunners have won six of their last seven league games and are one point behind Tottenham - who play Everton on Sunday, with Chelsea at home to Sunderland.

West Brom remain eighth, which would be their highest Premier League finish, but they have only won once in their last five top-flight games.

Arsenal were back at The Hawthorns for the first time since on the final day of last season to secure Champions League qualification.

They returned in the midst of another battle to reach Europe's elite club competition.

That perhaps contributed to a edgy start, in which Rosicky was forced to clear a Yacob header off the line. But if his intervention was vital in defence, it was equally telling in attack.

The breakthrough appeared to settle Arsenal's nerves and Ben Foster saved well with his legs to deny Gervinho, while Aaron Ramsey prodded wide when he should have found the net.

West Brom offered little in attack, though they had strong claims for a penalty when Laurent Koscielny brought down Yacob.

With the Baggies yet to come from behind at half-time to win a game this season, and Arsenal in possession of the division's best second-half record, a turnaround seemed unlikely.

The odds lengthened when Rosicky doubled his side's advantage, beating Foster at the second attempt having been set up by Ramsey.

Long then met a perfectly weighted pass over the top, drawing a clumsy foul from Mertesacker that earned the German a straight red card.

Morrison drilled his spot-kick through the legs of Fabianski to haul his side back into contention with half an hour remaining.

McAuley headed off target, Lukaku curled a glorious chance wide and Long lashed over the bar when well placed.

Arsenal's celebrations at full-time showed how much the result meant.

"We could have had a penalty for a challenge on Claudio Yacob on the edge of the box [by Laurent Koscielny]. On another day that was a penalty and would have changed the complexion of the afternoon.

"We were disappointed to lose the second goal at the start of the second half. It was crucial for us to get back in it and we gave away another soft goal, a bad goal to lose.

"At 2-0 it is difficult to chase the game. We made a couple of changes. Then the penalty and the red card does change the game and gives us the chance to get something from the game."

"We know we have one target - to win our games. Then we don't have to look at Tottenham or Chelsea.

"If we lose our games, then you have to look at the results of the others. Our attitude is simple, we have to win the games.

"Can we finish fourth? I believe we will do it. We are conscious as well we have to give 100 per cent commitment in every game and it will be difficult and edgy to the end.

"We are ready for the fight and we always tell the players 'don't look at everyone else, just focus on ourselves'."