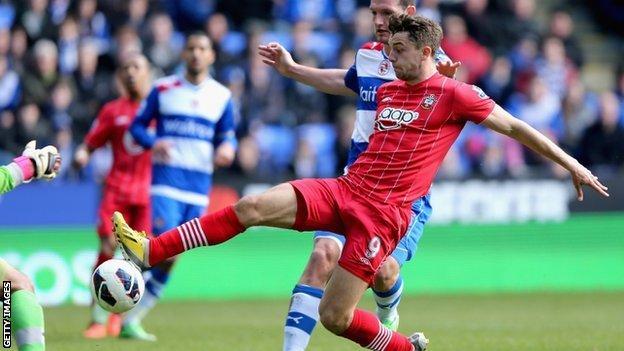 Reading's hopes of avoiding relegation suffered another massive blow as they were well beaten by a Southampton side who have all but secured safety.

The Royals, managed by former Saints boss Nigel Adkins, made a bright start but faded badly after Jay Rodriguez slid in to give Southampton the lead.

Reading rarely threatened as they slumped to a seventh successive loss.

It is a Premier League run that only the Royals' own sequence earlier in the campaign can match this season, and one that leaves them seven points adrift of 17th-placed Wigan, who also have two games in hand.

Southampton, in contrast, are seven points clear of the relegation zone after a third successive league win.

Adkins, facing the club who sacked him in January following a five-game unbeaten league run, cut a forlorn figure as he watched his new recruits outplayed and out-thought by the side he put together.

Lining up with five changes from the side thrashed 4-1 by Arsenal last weekend, Reading started positively and came close to scoring when an unmarked Sean Morrison headed Chris Gunter's free-kick over the bar.

Another free-kick from almost the same spot presented the hosts with an even better opportunity midway through the half as the ball bobbled off two Southampton players to the Royals' top-scorer Adam Le Fondre, who sliced his half-volley high.

The chance marked the start of an uncomfortable spell for Southampton in which the hosts were denied a penalty when Hal Robson-Kanu went down under a challenge from Jos Hooiveld and Adrian Mariappa's header from Guthrie's cross drew a sharp save from Saints keeper Artur Boruc at his near post.

The visitors, for their part, enjoyed plenty of possession but did not threaten Federici's goal until the 35th minute, when Gaston Ramirez headed Jack Cork's cross narrowly wide.

Moments later, the visitors were ahead. Rodriguez laid the ball off to Lambert and chased down his strike partner's chipped return. Reaching the ball a fraction of a second before Federici, he slid in to prod the ball home through the keeper's legs.

Rodriguez's momentum took him through Federici, prompting angry calls from Adkins for a foul, but referee Mike Jones awarded the goal.

Suddenly rampant, the Saints could then have put the game beyond their hosts before half-time. Rodriguez drilled a shot against the bar from 10 yards, then brought a one-handed save out of Federici after a mistake from Mariappa. The loose ball fell kindly for Ramirez but he dragged his side-footed effort wide.

Reading's defensive frailties were exposed again early in the second half as Steven Davis sprinted on to Lambert's volleyed pass only to shoot tamely at Federici.

And shortly afterwards, Lambert came within a boot's length of toe-poking home a low cross from Rodriguez.

The second goal came from another flowing move as substitute Lallana played a one-two with Rodriguez and calmly side-footed his 50th Southampton goal.

Reading resorted to a more direct approach and it almost paid dividends when a long ball found Le Fondre, whose header was caught - and almost carried over his line - by a back-pedalling Boruc.

Reading's players and fans screamed for a goal but replays suggested the whole of the ball had not crossed the line.

Angry and frustrated, the Royals supporters started to flood out of the stadium in the last 10 minutes, knowing that their team's days in the Premier League are likely to be running out.