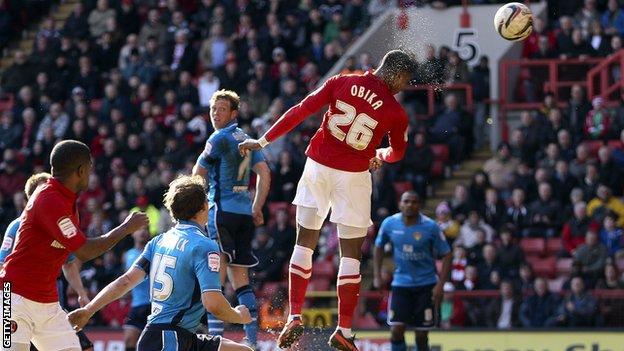 Johnnie Jackson put Charlton in front with a powerful strike after Andy Hughes's shot deflected into his path.

After Neil Warnock had left Leeds following their Monday defeat by Derby, Luke Varney looked to have earned caretaker boss Neil Redfearn a point with his 82nd-minute strike.

But Obika got the winner in added time as he headed in Rhoys Wiggins's cross.

Despite failing to keep a clean sheet at The Valley in 12 league and cup matches, Charlton extended their unbeaten run against Leeds to five games.

The visitors had a penalty appeal early on when Paul Green went down in the box, but the claims were waved away by referee Stuart Attwell.

But it was the home side that nearly took the lead as Leeds defender Jason Pearce's sliced clearance was instinctively kept out by goalkeeper Paddy Kenny.

They did go ahead after the break, though, as Hughes's strike was followed up by Jackson for his 10th goal of the season.

Leeds looked to get back on level terms and came close through Steve Morison, who hit the post, before former Addicks player Varney was sent on, and he thundered in an equaliser eight minutes from time.

Charlton had not previously scored a stoppage-time goal in the Championship this season, but Obika nodded in the winner in added time to help his side move up to 12th in the table.

"I'm really pleased with the whole week, ecstatic with the performance - we didn't deserve to be at 1-1.

"It has been a pivotal week to get seven points and a real gritty, dogged point at Brighton.

"To beat Leeds was fully deserved, we have Wolves and Bristol City [still to play] and we can keep carrying on.

"Any point in the Championship is massive - I don't want our players relaxing. I've set them no targets."

"I thought the performance and application was good, we were unlucky at the finish because we should have got a couple of decisions.

"From a performance point of view, I thought we went a goal down against the run of play - we were doing well up to that point.

"Whenever the manager leaves, it's upsetting - these are players that Neil Warnock signed. But they've applied themselves well.

"It was a good performance without being spectacular, it was a poor surface. They will be disappointed, but they've been professional at what they've done."