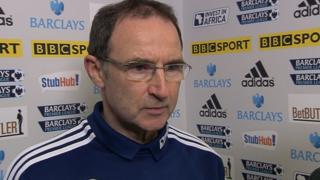 In his last interview as Sunderland manager, Martin O'Neill says there is "a steely determination" among his players to stay in the Premier League, despite a 1-0 home loss to Manchester United.

The Black Cats were beaten by a Van Persie effort that was turned into his own net by defender Titus Bramble, a goal O'Neill says "sums up the way things are going".

O'Neill was sacked later on Saturday, with seven matches of the season remaining.