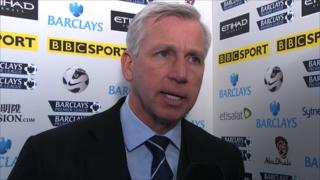 Alan Pardew says Newcastle were not "tight or aggressive enough" as they lost 4-0 at Manchester City.

The Magpies manager admits his side found it "difficult" to face a City side playing with "no pressure" and believes his side need at least two more victories in order to ensure their Premier League survival.

The defeat leaves Newcastle 15th in the league table, just three points clear of the relegation zone with seven games of the season remaining.