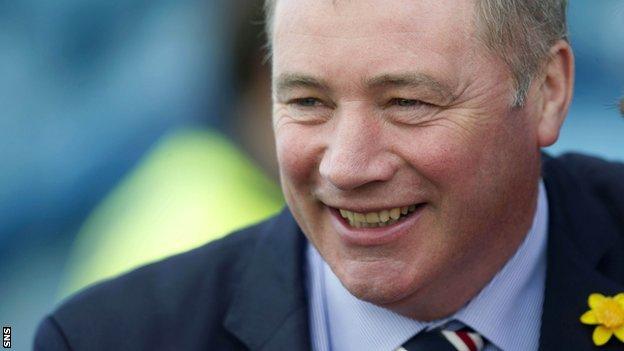 Rangers are winners of the Scottish Third Division after bettering Queen's Park's result in Saturday's games.

"We've been the best side in the league," manager Ally McCoist told the club website.

"The fact we're sitting 22 points ahead would indicate we are thoroughly-deserving champions. There's no doubt about that."

The championship trophy will be presented on 4 May, when Rangers host Berwick Rangers in their final league fixture.

And McCoist insists his players deserve to celebrate and be congratulated for their success despite a recent dip in form, which has seen them win two out of six matches.

"The boys all deserve massive credit," he added. "The young lads deserve enormous credit, as do the older lads such as Neil Alexander, Lee Wallace and Lee McCulloch.

"It has been an incredibly difficult situation for people in many ways. Some people won't give them any congratulations but that's certainly not the case from myself and the staff."

The Rangers team bus stopped at a pub in Aberuthven near Gleneagles to celebrate after Elgin's victory was confirmed.

"It was hilarious," explained McCoist. "We stopped off right on the final whistle of the Queen's Park-Elgin game, when we knew we had won the title.

"As you can imagine, we walked in and some of the lads are still only old enough to drink lemonades.

"But when we got into the pub, there were two punters at the bar and they quickly shouted to the owner of the place to remind him of his strict rules about having no football colours!

"With 20 Rangers players standing there in their tracksuits, it was very funny and we stopped there for half an hour or so for the boys to have a celebratory drink which was well earned."

McCoist was manager when the then reigning Scottish Premier League champions Rangers entered administration in February 2012 over unpaid tax.

When liquidation could not be avoided, a consortium led by Charles Green bought the club's assets in June and the Ibrox side were subsequently placed in Scottish football's bottom tier for season 2012-13.