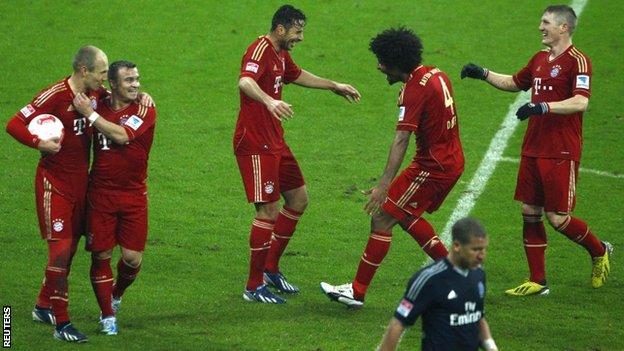 German side Bayern Munich produced a sensational performance to thrash Hamburg 9-2 and take another step towards becoming Bundesliga champions.

The Bavarians would have sealed the title with that win had Borussia Dortmund failed to defeat Stuttgart - but the defending champions won 2-1.

The German giants have 72 points, 20 more than Dortmund, who were handed victory in Stuttgart thanks to Robert Lewandowski's late winner.

What made Bayern's 9-2 victory all the more remarkable was that key players David Alaba, Thomas Muller, Franck Ribery, Mario Gomez and Mario Mandzukic, were all rested with the first leg of their Champions League quarter-final match against Juventus on Tuesday.

It was the fourth time Bayern have scored nine goals in one match. Borussia Monchengladbach still hold the record for the biggest win which was a whopping 12-0 victory Borussia Dortmund in 1978.