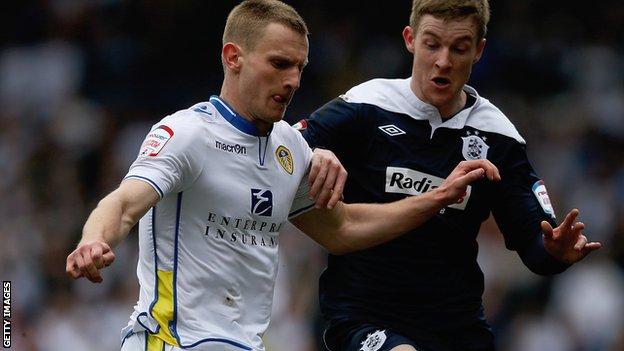 England Under-21 star Lees was shown a straight red card for a high tackle on Ipswich's Jay Tabb after 32 minutes.

I've never been to Ipswich and dominated as much. If I was Mick McCarthy I'd fill in a lottery ticket

"We've got one lad who's let everyone down. He's let me down, the team down and the fans who travelled here," said Warnock. "It was one stupid moment.

"I don't know what else I can say, other than it was a ridiculous tackle."

Leeds dominated the early exchanges in a promising start at Portman Road, but their chances of a first away league victory since 1 December evaporated following Lees's sending-off.

David McGoldrick scored the opener on the stroke of half-time before the forward doubled Ipswich's lead with a simple header after the break.

Substitute Jay Emmanuel-Thomas drilled in the third to cap a miserable afternoon for Warnock, whose side dropped to 11th place.

"It's difficult doing a press conference when you think you should have won three or 4-0 and you've lost 3-0," added Warnock.

"It's a crazy day and I can't believe we haven't won.

"We were dominating. I've never been to Ipswich and dominated as much as that in my life. If I was (Ipswich boss) Mick (McCarthy) I'd fill in a lottery ticket tonight."