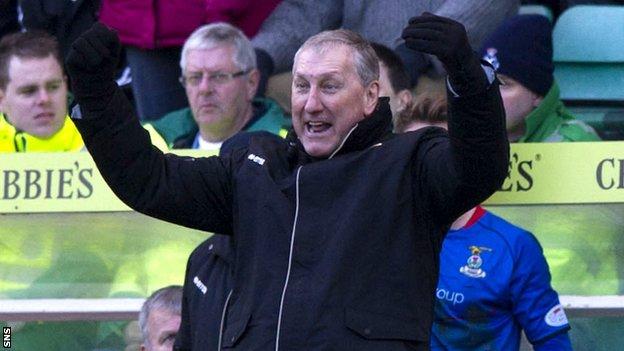 The Highland outfit's place in the top six is assured, but Butcher believes there could be more to come from his group of players.

Fifty points is a magnificent total and we haven't stopped yet

"Every game is test and we fancy ourselves against anyone, even Motherwell or Celtic," said Butcher.

"We want to improve it and keep going - and who knows where we could end up?"

The hosts responded with a Leigh Griffiths goal but Andrew Shinnie's 65th-minute deflected shot sealed the points for Butcher's men.

"I thought it was three points we deserved," said the manager. "We played some good stuff.

The start of the second half was our better spell, then Hibs got the equaliser and I thought it was going to be tasty.

"But the boys were very resilient and very tough - they showed good character and we got the second goal from a deflection, which was a bit of justice from our point of view."

Inverness remain three points behind second-place Motherwell as the Scottish Premier League heads for the split, and European football could be secured for next season.

"These boys have been doing this all year," added Butcher. "It's been an unbelievable effort from them - 50 points is a magnificent total from them, and we haven't stopped yet.

"I was asked the question 'do you trust the players?' I do trust them, they very rarely let us down or turn in a bad performance.

"There's been a consistency about them which has been brilliant."