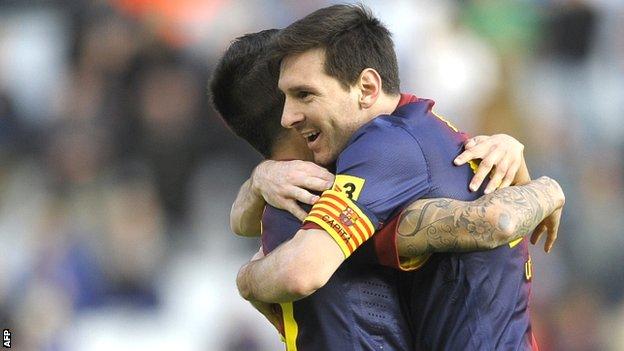 Barcelona forward Lionel Messi became the first player in Spanish football history to score against every other team in La Liga consecutively.

Messi has scored 29 goals in the streak and his tally in all competitions this season now stands at 56.

Barca are top of the table, 13 points clear of Real Madrid, who are second, with nine games left to play.

Current champions Real dropped points as they drew 1-1 in Zaragoza. Cristiano Ronaldo scored his 113th goal in 100 matches for the Spanish giants while under manager Jose Mourinho.

Lionel Messi is the top-scorer in the top five European leagues in 2013 with 17 goals. Cristiano Ronaldo has 14 and Robert Lewandowski 10

In Vigo, Messi captained the side and went on to break his latest record.

The previous mark for goals in consecutive La Liga games was 10.

Tello then cut the ball back for Messi to drill low into the net, only for relegation-threatened Celta to give their chances of survival a huge boost as Borja Oubina headed home at the back post on 88 minutes.

Barca now travel to France for the first leg of their Champions League quarter-final meeting with Paris Saint-Germain.