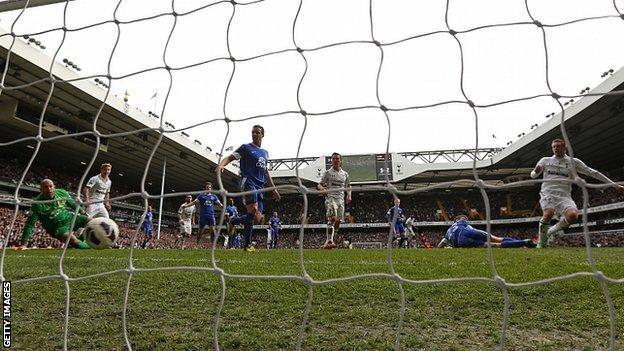 Gylfi Sigurdsson scored a late equaliser for Tottenham against Everton to cap a riveting match between two Champions League hopefuls.

But Everton levelled through Phil Jagielka and took the lead from a fine solo goal by Kevin Mirallas.

In a frantic finale, Adebayor struck the post and Sigurdsson slotted home the rebound to claim a vital point.

There was still time for Everton to go close as Victor Anichebe ran through on goal and saw his shot smothered by Spurs keeper Hugo Lloris.

But a draw seemed a fair result after a spirited attacking performance from two sides making light of the absence of some of their most creative players.

And Everton, who were missing the suspended Marouane Fellaini and Steven Pienaar, were once again indebted to the superb Mirallas, whose goal was every bit as eye-catching as his stunning solo winner against Stoke last weekend.

It was the home side who started the sharper, however, with their quickest goal in more than 12 years.

Vertonghen's whipped low cross from the left flank eluded two Everton players and found Adebayor, who stretched out a leg to steer the ball past Tim Howard.

Everton were then presented with their first opportunity by Michael Dawson. The Spurs centre-half's pass was intercepted by Leon Osman, who steadied himself before curling a right-footed effort narrowly wide of the far post.

They did not have long to wait for their equaliser, a Baines corner after 15 minutes picking out Jagielka, who climbed above Vertonghen to head the ball through Lloris's legs.

Watched by former star Paul Gascoigne, Tottenham enjoyed more of the ball for the remainder of the half without creating many clear openings.

They appealed for a penalty before half-time when Clint Dempsey's cross appeared to strike Darron Gibson's arm but replays suggested the ball struck him on the shoulder.

Everton began the second half on the front foot and had already gone close through Gibson when a moment of brilliance from Mirallas gave the visitors the lead.

The agile Belgian darted inside from the right, skipped past Scott Parker and Steven Caulker and placed a shot into the far corner.

Mirallas's effort was almost cancelled out by his countryman Dembele moments later, the midfielder's strike taking a deflection off John Heitinga before being parried onto the underside of the bar by Tim Howard.

Suddenly the game was alive with defenders tackling and blocking desperately at either end.

For Spurs, the lively Adebayor worked some space in the area but stuck straight at Howard and Dempsey curled a shot around the post.

With Everton's players defending deep inside their own half, the Toffees looked on course for three points as the game entered the final five minutes.

But inspiration arrived for Tottenham in the form of right-back Kyle Walker. Sprinting down the wing, he cut the ball back for Adebayor, whose curling effort stuck the post and rolled across goal for Sigurdsson to tap home.

The intervention of Lloris to deny Anichebe proved just as crucial as Spurs sealed a point that keeps them in touch with Champions League rivals Chelsea and Arsenal.