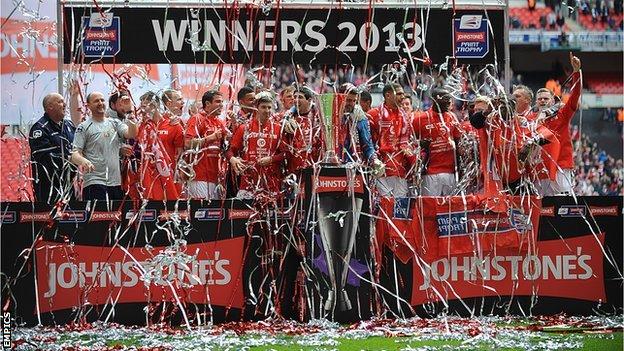 Crewe won the Johnstone's Paint Trophy in their first-ever appearance in the final by overcoming Southend United.

Alex captain Luke Murphy capped his side's early dominance when he applied the finish to a well-worked corner after just six minutes.

Teenager Max Clayton then popped the ball into an empty net after Bilel Mohsni had been bundled off the ball.

Southend's Britt Assombalonga had his header apparently stopped on the line by Harry Davis's outstretched arm.

The first goal is something we've tried before and it's never really come off. Luke Murphy's got that sort of quality in his locker

But, after winning the League Two play-off final against Cheltenham last May, Steve Davis's Crewe held on to secure their second Wembley win in less than 11 months.

They overcame Southend in the semi-final on the way to last year's success and their current status, a league above the Shrimpers, was evident in their superiority for much of the match.

Clayton saw his close-range effort saved by Paul Smith as Crewe made a bright start at a sunbathed Wembley. And it did not take them long to go in front with a goal rehearsed a few times on the training ground.

Byron Moore rolled a corner to the edge of the area, which Davis delightfully stepped over and, with the Southend defence wrong-footed, Murphy's right-foot curler dipped into the corner.

The Crewe pressure persisted, with Moore a constant threat down the right-hand side, but Southend managed to compose themselves and started to look dangerous from set-pieces, Ryan Cresswell flashing a header over.

This was the Essex side's first ever final at Wembley and Paul Sturrock, the man who led them to it, was sitting with the fans as new boss Phil Brown was given the privilege of managing the Shrimpers at the national stadium in only his third game in charge.

Brown, still searching for a first win with his new club, saw his side have a penalty shout turned down when Ellis tussled with Assombalonga in the area. Mkandawire should then have levelled when he miscued a header from Chris Barker's corner.

However, Crewe started the second half in the way they began the first, doubling their lead.

Clayton started the move by robbing Mohsni - who thought he had been fouled - and finished it too, poking in when Moore squared the ball across the box.

Southend came closest when Mohsni's point-blank header was stopped on the line by Davis's left arm.

But the Shrimpers were almost 3-0 down when substitute AJ Leitch-Smith's effort struck the Southend bar.

They will be wondering whether they are destined always to fall short this competition, after back-to-back LDV Trophy final defeats at the Millennium Stadium in 2004 and 2005.

For Crewe, with the help of some gutsy and sometimes desperate defending in their own six-yard box, it is two successful trips to Wembley in successive seasons.

"It was about putting in a really good performance and trying to entertain at the same time.

"The first goal is something we've tried before and it's never really come off. Luke's got that sort of quality in his locker.

"Because they're a big side we felt we couldn't lob it in there. We had to find different ways of exploiting them.

"They caused us some problems, but we put our bodies on the line, got some blocks in and did some decent defending."

"It is a lonely place when you get beat. Certainly the effort and determination of the players was there to try and win.

"But that bit of nous or quality was missing. But I can't fault them for trying to get something.

"How Bilel Mohsni has not scored to make it 2-1 I'll never know.

"Crewe are renowned as a good passing team. But if you looked at that game on its merits and see how much they defended and put their bodies on the line, that was the difference and they earned their clean sheet."