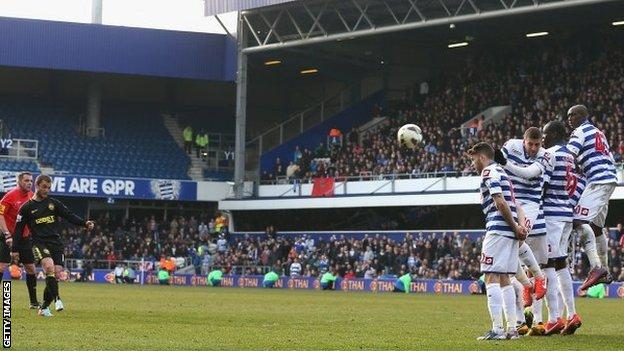 Shaun Maloney's 94th-minute free-kick earned struggling Wigan a point and denied 10-man QPR what would have been a vital win at the bottom of the table.

Loic Remy hit the post early on but Rangers had to play for 70 minutes with 10 men after Bobby Zamora was sent off for a high challenge on Jordi Gomez.

Wigan struggled to make their extra man count and QPR thought they had won it through Remy's superb breakaway goal.

But Maloney replied in injury time with a curling shot into the top corner.

It was a cruel climax to another frustrating day for QPR boss Harry Redknapp, who had described this game as a 'must-win' before kick-off and came within seconds of collecting what would have been an unlikely three points.

Wigan, looking a shadow of the side who had won their previous three matches, barely deserved the draw, but it means they are only in the relegation zone on goal difference, behind Sunderland.

QPR, meanwhile, remain in deep trouble, only one place below the Latics but seven points further back, and with only six games to save themselves.

It appeared the Rangers players had responded to their manager's pre-match pledge that only victory would do against their relegation rivals as they made a bright start.

Junior Hoilett knocked down an Andros Townsend cross for Remy, who had time to shape himself on the edge of the box and fire in a dipping first-time shot that cannoned back off the post.

While Rangers were direct, the Latics were patient, but they did not look much of a threat until Zamora's untimely exit after 20 minutes.

Zamora, who was late and high when he clattered his boot into Gomez's head from a Wigan throw, disputed the decision, which came after referee Phil Dowd had a lengthy discussion with his assistant Scott Ledger, but TV replays showed the officials had little option but to dismiss him.

The extra man allowed the Latics to step up their passing game and they began to threaten at last.

QPR keeper Julio Cesar, who had injured his elbow in the warm-up, might have expected an onslaught but some determined defending meant he only had to face shots from distance.

Callum McManaman curled one effort over and drilled another narrowly wide and, when the visitors did find the target, Cesar scrambled to his left to keep out a skidding James McCarthy effort.

Wigan continued to toil in attack after the break, and it took until the 76th minute for them to force Cesar into his next save. It was a good one too, with the Brazilian keeping out James McArthur's header at point-blank range.

More pressure from the Latics followed, but it was from a free-kick on the edge of the Rangers box that the home side took the lead with five minutes to go.

Mbia surged forward after an over-elaborate set-piece was blocked and almost reached the edge of the Wigan area before finding Remy to his right, for the Frenchman to sidefoot an unstoppable first-time shot past Wigan keeper Joel Robles.

The Latics, who have climbed up the table on the back of two straight league wins after beating Everton in the FA Cup, responded by piling men forward and eventually QPR cracked.

Mbia fouled Maloney on the edge of the area and he stepped up to bend the ball through the wall and past the diving Cesar.