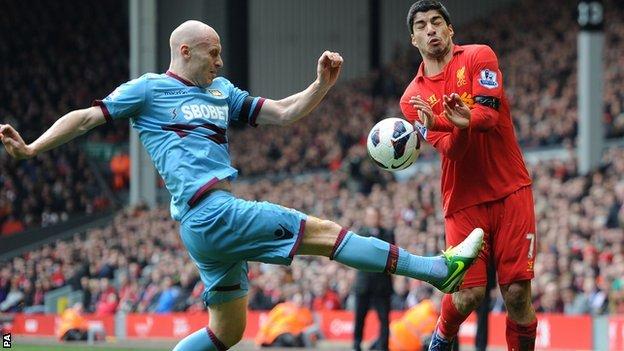 Liverpool and West Ham fought out a largely disappointing goalless draw which damages the home team's European ambitions but eased relegation concerns for their opponents.

The Hammers were denied their first win at Anfield for 50 years when Lucas Leiva cleared Jack Collison's late header off the line.

Luis Suarez was marshalled expertly by West Ham defender James Collins, although the Uruguay forward did force an injury-time save from Jussi Jaaskelainen at the goalkeeper's near post with a low shot.

The draw leaves Liverpool in seventh, three points behind local rivals Everton having played an extra match, while West Ham are now seven points clear of the relegation zone.

It also brings the east London side to within a point of the 38-point target manager Sam Allardyce has set before he signs a new contract with the Upton Park club.

The central-defensive pairing of Collins and James Tomkins were crucial to securing their side's clean sheet, as Allardyce earned a first point in his last nine games against the Reds.

The match had been preceded by a minute's silence in the last game at Anfield before the 24th anniversary of the Hillsborough disaster on 15 April.

When the action got under way, Liverpool had the majority of possession and looked the more threatening going forward, without creating any clear-cut chances.

"West Ham have got a precious point in their bid to secure survival but Liverpool have dropped points in their challenge for a European place. A deserved draw for Hammers boss Sam Allardyce's side and a frustrating result for Reds counterpart Brendan Rodgers."

And it was the visitors who went close to taking the lead when midfielder Mohamed Diame, showing sparks of his quality, beat four Liverpool defenders inside the box before hammering a strike over the bar.

Liverpool's frustrations increased when Daniel Sturridge, who replaced Stewart Downing midway through the first half, saw his shot on the turn saved at the far post on the stroke of half-time.

After the break, the Merseysiders increased the pressure but the visitors held firm, Tomkins blocking a goal-bound Steven Gerrard effort just in front of the line.

The home side did have the ball in the net when Sturridge turned in Jordan Henderson's shot only for the goal to be disallowed for offside.

West Ham thought they should have had a penalty for a Jose Enrique tackle on Tomkins, who then might have conceded a spot-kick himself for a challenge on Gerrard.

As Liverpool continued to struggle to find a way through the visitors, West Ham almost stole the three points late on but Lucas cleared Collison's header off the goal-line.

"The effort the players put in was very good. We just needed a bit of luck to go our way. I'm disappointed Daniel Sturridge's goal was disallowed for offside as I thought it was onside.

"You have to give West Ham credit as they defended very well. I never for one moment thought they were going to win it. They got in some great blocks and are an honest group of players that put their bodies on the line but only one team tried to win it and that was us, but we couldn't put the ball in the back of the net."

"I am content, even though we should have won the game. We nullified Liverpool's strengths and created the better chances to score. I'm delighted. It's only our finishing that has cost us the three points.

"Jose Enrique kicked James Tomkins when we should have had a penalty but I am satisfied with the performance and result. We know we've created better chances than Liverpool, even though they had more possession.

"James Collins and James Tomkins were outstanding. It's a big point. We are ever closer to the magic 40."