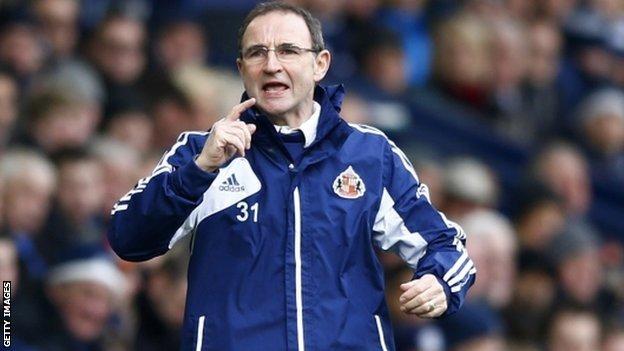 Sunderland made a mistake in sacking manager Martin O'Neill, according to former player Kevin Kilbane.

The Black Cats sit only one point above the Premier League relegation zone, with Saturday's defeat by Manchester United their eighth game without a win.

But Kilbane told the BBC: "I'm very surprised. It's the wrong decision at the wrong time.

"I doubt if a manager can come in now and really change things around until the end of the season."

"It's a personal and professional blow for Martin O'Neill. In 20 years as a league manager, on either side of the border, with six clubs, he has never been sacked. He's a very, very proud man. This will hit him; this will cut him."

Former Republic of Ireland international Kilbane, who played 124 games for the Black Cats between 1999 and 2003, added: "As a whole, they've struggled this season. They've had a few injury problems which have not helped their cause.

"Now they've made the change and you've got to respect the owners for doing that, but I don't think it's the right decision to make.

"I think they should have continued with Martin O'Neill until the end of the season and tried to establish themselves in the Premier League, but this puts everything back up in the air again."

Former England manager Steve McClaren, who left his role as coach of FC Twente in February, has been linked with the role, but his agent ruled him out of the running.

"It's obviously a nice position for Steve, but as I understand Sunderland have already got somebody in place," Colin Gordon told BBC Sport.

Names in the frame

Paolo Di Canio, 44, is the bookmakers' favourite to succeed O'Neill. Other names in the frame include ex-Queens Park Rangers and Manchester City manager Mark Hughes and Roberto Di Matteo, who won the Champions League and FA Cup as Chelsea's interim manager last season.

Liverpool manager Brendan Rodgers said he was surprised to hear of the sacking.

Speaking after his side won at Aston Villa, Rodgers said: "Whenever someone of the status of Martin O'Neill loses his job, then we all have to be on the back foot.

"This is a guy who has been in the game for many years, has many years experience, went into Sunderland and picked them up off their knees.

"Okay, they are going through a difficult time, but he is still a top-class manager.

"I hear the same things about Stoke and Tony Pulis. I think some clubs need to be careful. They need to understand where they are at."

Villa boss Paul Lambert played under O'Neill at Celtic and said: "I only knew late last night and I was shocked like everybody else at what had happened.

"Nobody is safe. I had the privilege of working under him for five years and it was fantastic."

"We've not been in the relegation picture until the last couple of weeks but we've slowly slid down the table," he said.

BBC Match of the Day pundit and former England striker Alan Shearer was another to express his surprise at the decision.

"The timing is bizarre," the Premier League's record's goalscorer said. "He is usually upbeat, but he seemed down and not his usual energetic self recently. Whether he knew something was happening behind the scenes, I do not know."

Fellow pundit Alan Hansen believed Sunderland owner Ellis Short's move may have occurred because of the huge pressure to stay in the top flight, ahead of the new £3bn television rights deal which comes into effect next season.

"The rewards of success and penalties for a lack of success have never been greater," the former Scotland and Liverpool defender said. "I have always thought Sunderland would be safe but, for the first time today, they were really poor. The alarm bells were there."

But former Crystal Palace and Reading boss Steve Coppell criticised Short and the way some clubs are operated in the modern game.

"We have so many owners who are toying, they don't understand the heritage of English football and it's very much 'I can do what I want with my club' and it seems that way, unless they have somebody lined up," he told BBC Radio 5 live's Sportsweek.

"We've just had an international break, if you were going to make a change, constructively you would have made it then, now you can't do that kind of thing, seven games to go, whoever comes in has got an almost impossible task.

"There are so many foreign owners now, and I've got nothing against that, but there is a certain history, traditions, almost a way of doing things that has almost gone out of the window."

However, former Sunderland defender Michael Gray believes the Black Cats players must also take some responsibility for the removal of O'Neill.

He wrote on Twitter: "So where do we go from here Sunderland? Do we just keep sacking managers or do we start pointing the finger at the players?"