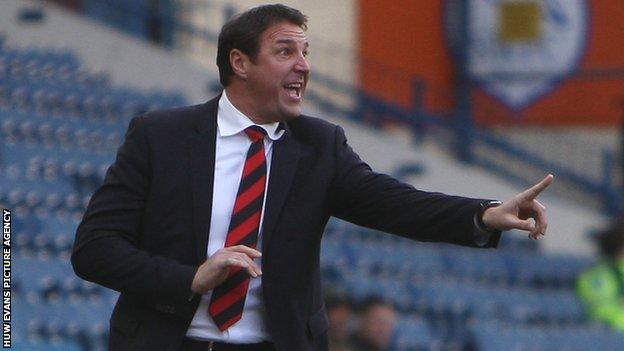 Cardiff City manager Malky Mackay has warned that they face another tough test of their promotion credentials at home to Blackburn Rovers on Monday.

The Championship pace-setters saw their lead at the top of the table trimmed to four points by Hull City after on Saturday.

"It's about just looking at the next game now, looking at what's six feet in front of your face," Mackay said.

"They [Blackburn] have a squad that is the envy of anyone in the division."

Cardiff need 14 points from their remaining eight games to clinch promotion to the Premier League.

Pride will be there and... Blackburn are fighting for their lives as well. Everyone has got something to play for

Blackburn were relegated from the top flight last season and again find themselves in a scrap to beat the drop, but Mackay has warned that they are not to be underestimated despite their 18th place.

"They came down from the Prem and didn't lose too many [players] and they've added to that with some real big signings," Mackay said.

"Jordan Rhodes, he's a goal-scorer and he cost £8m, so anyone who cost that sort of money better be a threat.

"They've also got an interim manager [Gary Bowyer] who will want to win enough games to maybe give himself a shout at the job as well.

"Pride will be there and... they're fighting for their lives as well. Everyone has got something to play for so it'll be a tough, tough game on Monday.

"We've got eight games that are important, no difference... and we make sure that we go out there and give everything we've got.

"Our away fans were fantastic [at Peterborough] and I'm sorry we couldn't give them a result to back to the Cardiff City Stadium, but I'm sure we'll have everybody out there on Monday looking after us."