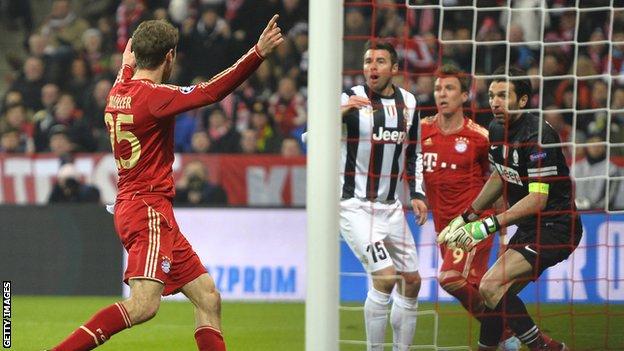 The German league leaders made the perfect start when David Alaba's deflected 35-yard shot spun past Gianluigi Buffon inside 30 seconds.

Bayern Munich are aiming to be crowned champions of Europe for a fifth time. The Germans won the European Cup in 1974, 1975 and 1976, before clinching their first Champions League title in 2001.

Bayern entered their sixth Champions League quarter-final in seven seasons on the back of a thumping 9-2 weekend win over Bundesliga rivals Hamburg and continued in the same vein as they produced another dominant display, full of attacking verve.

Serie A leaders Juventus, who beat Inter Milan 2-1 on Saturday to stretch their domestic advantage to nine points, struggled to find any rhythm and face a stiff task to overturn Bayern's two-goal advantage when the teams meet in the return fixture in Turin on 10 April.

An atmospheric Allianz Arena was already rocking as the teams emerged from the tunnel before the hosts made the perfect start.

Austrian defender Alaba's effort appeared to be speculative, but a slight deflection off the boot of Vidal left Juventus goalkeeper Buffon floundering as the ball crept inside the bottom corner of his goal.

Juve responded well after the early blow as they confidently kept possession inside Bayern territory. But they failed to stretch Germany international Neuer, with Andrea Pirlo's dipping 35-yard free-kick on to the roof of his net their closest effort.

Bayern coach Jupp Heynckes was forced into an early reshuffle as Toni Kroos limped off with a knee injury and was replaced by former Chelsea winger Arjen Robben.

But the enforced substitution did not disrupt last season's beaten finalists - instead it served to spark them into life.

Robben, Franck Ribery and Mueller were the focal points of a high-tempo attacking display as Bayern began to slice open the visiting defence with ease.

Robben had their best two chances, first drilling a low shot at the legs of Buffon after a poor clearance by Andrea Barzagli, before wastefully shooting wide after being picked out by Mueller's square pass.

After the interval, Bayern continued to produce waves of attacks as Buffon was called into action twice more.

David Alaba's goal after 25 seconds is the second fastest scored in the Champions League knockout phase. Another Bayern player holds the record - Roy Makaay who scored after 10 seconds against Real Madrid in 2007.

First, he beat away an effort from the hard-working Mandzukic before desperately pushing Alaba's fizzing 25-yard free-kick away from danger.

But questions will be asked about the veteran Italy international's contribution to the second goal.

He could only parry Luiz Gustavo's stinging 20-yard shot into the path of Mandzukic, who squared for the unmarked Mueller to roll into the empty net from close range.

Chances continued to be rare for the visitors before Vidal, who will miss the return leg after receiving his second booking of the competition, finally tested Neuer with two fierce drives within seconds of each other.

But the Italians could not force what would have been an unlikely away goal and a jubilant Bayern travel to Turin next week expecting to reach the last four for the second successive season.

"We prepared really well and that was the key - our pressing, our dribbling on the flanks, the way we closed them down.

"Against a team like Juventus, the small details play a big role and that was the case today. That is why I studied them so closely."

"We still have the second leg and in football, you play until the end before drawing conclusions.

"It's a tough result. Bayern proved they are a really strong team, one of the favourites."