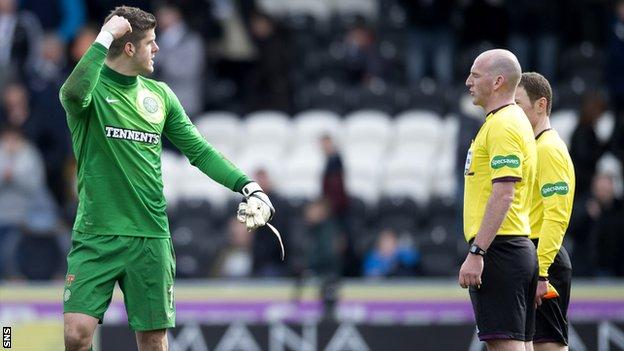 Manager Neil Lennon was scathing in his assessment of referee Bobby Madden's handling of Celtic's 1-1 draw at St Mirren.

Lennon thought the official was wrong to send off Victor Wanyama after 55 minutes and disputed the late penalty from which the home side equalised.

"That is by far the most appalling refereeing performance I've seen this season," he said. "For both sides.

Lennon also thought St Mirren were denied a penalty in first-half stoppage time when Georgios Samaras controlled the ball with his arm.

"It's a clear penalty," he said. "Samaras has handled the ball. How he doesn't see that and the linesman doesn't see it is beyond me.

"We're talking about the referee rather than the competitive nature of two good footballing teams.

"I haven't said anything insulting or called the referee's competence. I just thought he had an appalling game."

Wanyama was shown a straight red card for catching Paul McGowan with a late tackle in the centre circle.

When asked if Celtic would appeal against the midfielder's suspension, Lennon replied: "Absolutely. It's absolutely awful.

"Beram Kayal was thrown into the advertising boards and five seconds later my man gets sent off - which is never a red card.

"The sending off killed the game as a spectacle.

"And that is not a penalty for St Mirren. It was outside the box and there was no contact.

"I've been pretty concerned for the last couple of months about the abhorrent decisions I've seen - not just against my team but in general in the Scottish game."

Kris Commons headed Celtic into an early lead but the Scottish Premier League leaders could not build on their good start, with the St Mirren midfield turning in an impressive display.

"St Mirren came on strong after we scored and had a decent 20 minutes which you expect away from home," added Lennon.

"We looked okay at the start of the second half, without being brilliant, but never really settled.

"Our ball retention should have been better, even with the 10 men.

"I'm a bit concerned. There's still a few of them not finding their best form. I don't know why. We've got a week now to get ready for Hibs and I want to start seeing performances at the level I expect."