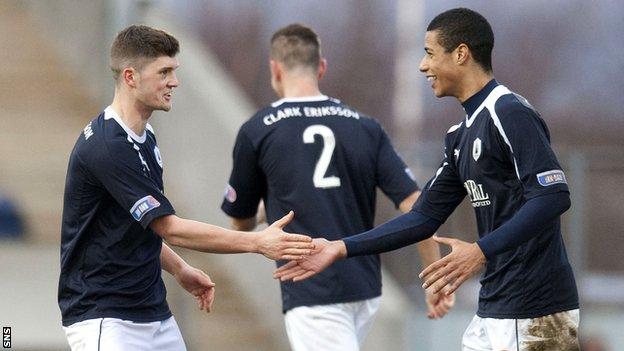 Falkirk will "pursue other viable options" if proposals for league reconstruction are not voted through.

The Bairns also say Scottish Football League chief executive David Longmuir "presented a very negative view" of the 12-12-18 divisional plan at the most recent gathering to discuss the issue.

"Falkirk cannot stand back and allow this opportunity to slip through our fingers," read a statement.

"The state of the full-time clubs in the First Division is deteriorating."

Hamilton chairman Les Gray has told BBC Scotland that he is willing to explore the possibility of clubs breaking away from the SFL, if immediate change is blocked.

But Doncaster has dismissed talk of a so-called SPL2 as "a distraction".

Falkirk and Hamilton are frustrated because 14 SFL clubs have indicated that the proposals should be delayed for 12 months despite previously widespread support for a merged league and extended play-offs to be implemented in time for next season.

Bairns chairman Martin Ritchie said: "I have been involved in league reconstruction discussions since the day we escaped relegation at Inverness in 2009 and this is the closest we have ever come to actually achieving change.

"After the 28 to 1 indicative vote in favour of the proposals on 31 January, we went into [Thursday's] meeting confident that the SFL would provide the 75% majority required.

"David Longmuir presented a very negative view of the SPL proposals, clearly distancing himself from ownership of the proposals.

"As a result, the SFL clubs were split down the middle with a 14 to 14 indicative vote. Those who were against the proposals did favour continuing the process with a view to implementing the changes in a year's time."

"Neil Doncaster addressed all of the listed outstanding issues and it was apparent that all parties were very close to a final agreement and that there were no "show-stoppers".

"He also reaffirmed that there is a desire for change now within the SPL and that if this moment is lost there may not be another opportunity.

"[The nine First Division clubs - Dunfermline were absent] believe that a 42 club solution with a single league governing body is the way forward. However, the SFL indicative vote may have put that in jeopardy.

"We need change now. We also agreed that there was little chance that the SPL and the SFL clubs would vote for change in a year's time if they rejected this opportunity.

"Since the meeting, I have been in contact with Campbell Ogilvy and Stewart Regan of the Scottish FA and have asked if they could take a role in getting the proposed changes over the line.

"The hard work in drafting the articles and rules of the new league organisation is pretty much complete.

"What we now need is to build trust in the proposed new league organisation, build bridges between the SFL and the SPL management and gain acceptance from the 42 clubs. If this cannot be achieved, the board owes it to our club and to our supporters that we pursue any other viable options."

If 11 of the 12 SPL clubs approve the proposal at a meeting on 15 April, SFL clubs will convene later that week to have their say.