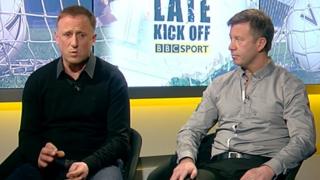 'It's in our hands', says Robins boss

Cheltenham Town manager Mark Yates tells BBC Late Kick Off Midlands that the hard work of his players is key to a second successive assault on promotion from League Two.

After losing in the play-off final at Wembley last year to Crewe, the Robins are once again well placed in the play-off zone ahead of their Easter Monday clash with Northampton.

Late Kick Off Midlands is on the BBC iPlayer from Monday.