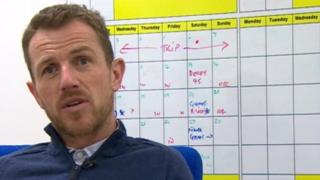 Rowett brewing up a promotion push

Despite being one of the pre-season favourites for relegation, Burton have mounted a sustained assault on promotion - including a 10-game winning run at home, which was ended by Chesterfield on Saturday.

"We've got a great bunch of lads who will give you everything basically," said the former Birmingham, Derby and Leicester defender.

Late Kick Off is on the BBC iPlayer from Monday.