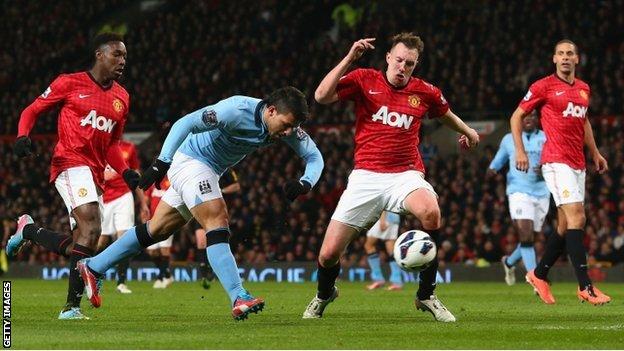 Manchester City reduced Manchester United's lead at the top of the Premier League to 12 points as they restored pride with an impressive victory at Old Trafford.

The reigning champions may have left it too late to prevent United claiming the title for the 20th time - but this deserved win hints at the pedigree that remains within Roberto Mancini's squad.

James Milner gave the visitors the lead early in the second half before an own goal from City captain Vincent Kompany put United level.

The final word, however, went to Aguero, who demonstrated pace and a powerful finish to decide an occasionally ill-tempered derby which saw eight players cautioned.

United still have much room for manoeuvre with the commanding advantage at the top of the Premier League, but this was a composed, resilient performance from City that demonstrated what might have been.

"City's line-up, with only one recognised striker in a 4-2-3-1 formation, did not look that attacking at first, but Carlos Tevez helped them take control of the game with his play in United's half. He kept dropping deep to collect the ball and, every time it went into him, he held it up.

"His first touch was fantastic and he brought the three players immediately behind him - James Milner, Samir Nasri and David Silva - into the game, and in dangerous positions in the United half too - often in their area."

Mancini has insisted the gap between the sides is not as wide as their points deficit suggests and on this evidence he is right. The Italian's argument, however, falls down on grounds of consistency as this was United first loss in 18 league games.

Wayne Rooney was back in United's attack after recovering from the groin injury that kept him out of the FA Cup defeat at Chelsea. He was fired up and visibly furious with team-mate Danny Welbeck in the opening minutes when he selfishly chose to go alone with his team-mate unmarked in yards of space.

Phil Jones was alongside Rio Ferdinand in central defence and he showed his worth with a couple of crucial penalty area interceptions, most notably from Carlos Tevez as the former United striker closed in six yards out.

City were seeing plenty of the ball but neither side was able to create any clear-cut chances, although Rafael's looping effort bounced to safety off the angle of post and bar moments before half-time.

In among some heated exchanges, Rooney was booked for a two-footed lunge at Milner while Kompany was also given a yellow card from referee Mike Dean for a late challenge on Ashley Young.

City took the lead they just about deserved six minutes after the break - and it resulted from a rare error of judgement from veteran Ryan Giggs, whose needless back heel gifted possession to Gareth Barry. He found Samir Nasri before Milner's low 20-yard drive took a touch off Jones to beat David de Gea.

Jones was involved as the hosts drew level eight minutes later. He met Robin van Persie's vicious inswinging free-kick and his header ricocheted in off the back of Kompany in front of an elated Stretford End.

Mancini made his first change with 20 minutes left, introducing fit-again Aguero for Samir Nasri - and the Argentine demonstrated his brilliance to put City back in front.

He produced a burst of pace, something City had lacked, inside the area before flashing an angled drive high past De Gea.

It set up an angry rather than grandstand finish, with players from both sides involved in exchanges after Aguero and Ferdinand squared up when United did not put the ball out of play with David Silva down injured.

Young then limped off injured after a heavy Pablo Zabaleta challenge before referee Dean brought a frenetic evening to a close.