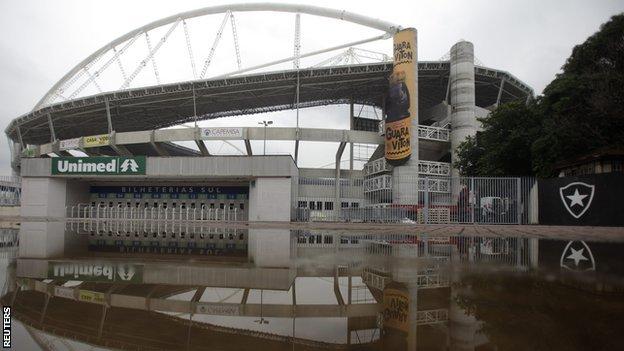 Brazil's preparations for the 2016 Olympics suffered another setback over the weekend when the Rio de Janeiro derby between Botafogo and Vasco da Gama was called off because the stadium was declared unsafe.

The Estadio Olimpico Joao Havelange, known locally as the Engenhao (after the neighbourhood), has been in action for less than six years. Already it is in such poor condition that there is a risk of the roof blowing off and the stadium has been closed indefinitely.

The story hit the global headlines because in a little more than three years the Engenhao will spend a week as the centre of the world when it will host the track and field events in the 2016 Olympics.

In its short life the stadium has not exactly proved popular with Rio football fans, and it could well be the least impressive Olympic athletics venue for some time. But, presumably, all structural defects will have been solved by then.

There is a more immediate problem - where will the Rio clubs play their local derbies? The city's iconic Maracana stadium is still closed for 2014 World Cup work.

It must be reopened for June's Confederations Cup, but may still need some finishing touches to be applied afterwards. It is not yet known when, and on what terms, it will be made available to the clubs.

There is Vasco da Gama's ground, Sao Januario. Steeped in history, it is a favourite of mine, and was briefly the biggest stadium on the continent when it opened in 1927. But it has seen better days, and so have the streets surrounding it.

The authorities will only accept games there with a 90/10% split of supporters. This is unacceptable to the clubs, and so the big local derbies will have to be held out of town in Volta Redonda - two hours away by bus.

But it is not only the 2016 Olympic connection that has given the closure of the Engenhao such worldwide attention. It is also because this is a story which captures the prevailing mood.

For the last few years the global media has been full of reports on the rise of Brazil, the awakened tropical giant taking huge strides forward. More recently came the backlash and questions are beginning to be asked.

Why isn't Brazil moving as fast as it could? What is holding it back?

The bizarre tale of a collapsing new stadium seems to symbolise some of the possible explanations - shoddy infrastructure, inept government, a lack of faith (frequently justified) in collective solutions.

The ever astute Andre Kfouri wrote in Saturday's issue of the sports daily 'Lance!' that "the closure of the Engenhao is the best possible piece of propaganda for the events we are going to receive in the next few years. There is no jingle or slogan. It is Brazil in its pure state."

In 2011, Paul McCartney and Justin Bieber held live concerts at the Brazilian stadium

The secret is out - in the eyes of the world, Brazil is no longer a sideshow.

Fifteen years ago I spent a few days working with a team from the BBC current affairs programme Panorama. They had decided to come to Brazil after doing an interview in Switzerland with then-Fifa president Joao Havelange.

Asked about the state of the domestic Brazilian game, Havelange had replied that it was in good health and challenged them to go and see for themselves. And so they did, and arrived at an especially turbulent moment.

The big Rio teams were at war with the local federation, and in protest they were not turning up for matches. Tickets were sold, there were some fans in the stands, there was a referee ready to blow his whistle - and no players.

It all made for some great television images. The Panorama director said that he decided to come because he had the clear impression that Havelange did not expect him to. He called the Fifa president's bluff.

But it was a one-off. In general, the global media was content with its traditional, lazy images of Brazil. The spotlight was elsewhere.

Not any more. The country now has an unprecedented international profile. This, of course, is a massive opportunity, a chance for Brazil to show that it has so much more to offer besides beaches and bikinis.

But it also means that the country's problems are going to be examined as never before. Stories such as the Engenhao closure (or the fight in December between security guards at Sao Paulo FC's stadium and visiting players from Argentina) reach an audience that would have been unthinkable just a few years ago.

Brazil has certainly made massive progress over the past two decades, with millions of people joining the middle class. But there has been no revolution -there is still much about the country and its social relations which remain semi-feudal. The old oligarchy have not disappeared - indeed, they are still strong in football politics.

It is a complex and contradictory place. Brazil, as the famous saying goes, is not for beginners. Over the next few years, foreign visitors, tourists and journalists alike, may look under the rock and discover that while much is to their liking, not everything is.

Many are worried about this. I frequently appear on a round table discussion on Brazilian TV. One of the presenters is concerned - "We're not prepared to take criticism from outsiders," he says. "We just get offended."

It is a fair observation. Brazil has a self-esteem problem, and as a consequence can be prickly and defensive. But I am more optimistic.

There will be moments of tension, but I believe all concerned have more to gain than to lose from this process when Brazil hosts the world.

What Kfouri identified as "Brazil in its pure state" will be shaken up a bit, which may be no bad thing.

As a Manchester City fan I am delighted to see Pablo Zabaleta finally get the plaudits he deserves as a quality full-back. His defensive performances have been outstanding in a stop/start season for City, moreover his overlapping runs have been one of City's few effective means of attack this year. How is Zabaleta rated in his native Argentina, and is he deployed in a similar manner in the national team? Sean O Ciardha

"He wasn't originally a right-back - he was a right-sided midfielder with plenty of thrust and his conversion to full-back has been something of a marriage of convenience, since it is a position that Argentina have struggled to fill in recent years.

"I think he's valued back home for the same kind of things that City fans see in him. He might not be the most talented player around, but his mentality and application are first class, making him the type of player who is always welcome in the squad.

"It will, though, be interesting to see whether he keeps his place in the team. The way Argentina play leaves their full backs exposed, and Zabaleta is coming under pressure from Gino Peruzzi of Velez Sarsfield, who looks a more natural defender."

Dede, the Brazilian centre-back that plays for Vasco da Gama, was recently linked with my club Liverpool. Because I have not seen him play, would you be able to shine light on what type of player he is and whether he is worth the reported £12m-15m figures? Also what are Liverpool's chances of signing him and are Vasco willing to sell? Bilaal Mayet

"I would have thought he's worth every penny. He's a towering centre back, quick over the ground, commanding in the air and capable of bringing the ball out of defence. His characteristics would be well suited to European football - though he might need some good man-management off the field to help him settle in.

"Vasco are in financial trouble and are resigned to losing him soon. Corinthians have shown an interest, but Vasco would prefer not to sell him to a Brazilian rival. He has some international caps, and so would have a chance of getting a work permit."