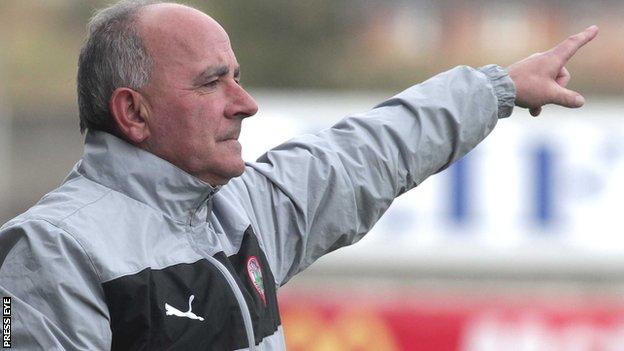 Cliftonville boss Tommy Breslin wants a final burst from his team to secure the title, starting with Tuesday's showdown with challengers Crusaders at Solitude.

The table-topping Reds are 11 points clear of the Crues while the north Belfast rivals meet again in the Irish Cup semi-finals on Saturday.

"We've worked hard for the last eight months but this week will determine what we end up with," said Breslin.

"We've asked the players for one final push in April."

Both teams have six league games remaining and with an 11-point advantage Cliftonville have one hand on the Gibson Cup.

There's commentary from Solitude with Joel Taggart taking you through the action in top-two clash between leaders Cliftonville and Crusaders.

There will also be reports from the other five league matches.

However, two of those fixtures are against the Crues and Seaview manager Stephen Baxter is not ready to settle for second place.

"While it is mathematically possible for us to win it then we'll be working hard and giving it our best," he said.

"Saturday's game in the Irish Cup is probably more important but every match against Cliftonville is big.

"We've been outstanding this season and the two north Belfast teams should be proud of their achievements.

"It's been a great run, I've enjoyed every minute of it and hopefully there's a wee bit left in the season yet."

Crusaders are boosted by the return of Chris Morrow after the missed Saturday's thrilling 5-4 win at Glentoran because of suspension.

There's also a crucial game at the other end of the table with basement boys Lisburn Distillery and Donegal Celtic meeting in a bottom-two clash at New Grosvenor.

The Whites sit two points behind the west Belfast visitors, who have Ciaran Carson back from a ban.

Glentoran midfielder David Howland returns from suspension for the Big Two game against Linfield at Windsor Park in the first series of fixtures after the Premiership split.

Glenavon full-back Kyle Neill is available again after a ban but Robbie McDaid remains suspended as the Lurgan Blues prepare to take on Dungannon Swifts at Stangmore Park.

Portadown welcome back Sean Mackle from a ban for the Showgrounds encounter against Ballymena United.