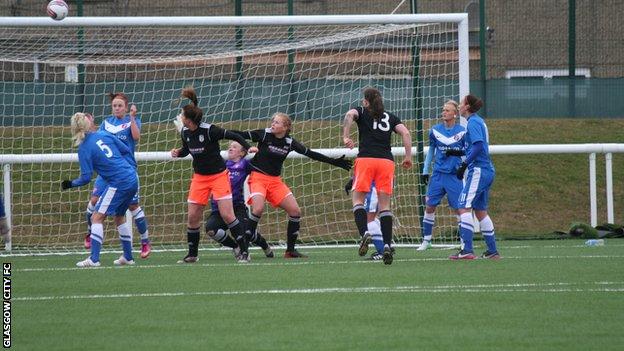 Glasgow City made it three wins out of three and sit top of the Scottish Women's Premier League after a 5-1 home win over last year's runners-up Forfar Farmington.

City could have been three goals up in the first 15 minutes, but poor finishing once more affected the champions in the opening stages.

And it was Forfar who took the lead against the run of play, through Caroline Heron.

However, within 60 seconds of Forfar going in front, City struck back and doubles from Suzanne Malone and Sue Lappin, along with a Julie Melrose strike, ensured a comfortable win.

"Once again we put ourselves in a bit of trouble missing so many," he said.

"In the second half, I thought we were excellent. We controlled the game, created lots of chances and most importantly didn't give any away."

In a match expected to be a tight affair, Hibs took the lead through Kirsty Smith, with Alana Bruce equalising soon after for Spartans.

However, it all went drastically downhill for Spartans after that, as Hibs striker Susan Fairlie hit a hat-trick along with goals for Lizzie Arnott, Katey Turner and Caroline Weir.

Celtic finally got their season up and running with a 3-0 home win against Hutchison Vale, with Abigail Harrison, Emma Brownlie and Suzanne Grant all finding the back of the net.

Rangers sit in seventh, ahead of Celtic on goal difference, thanks to a 5-0 win over Buchan.

After recently defeating the Grampian side 1-0 in the Cup, Rangers won the league encounter more comfortably through strikes from Megan Foley, Natalie Ross, Rachel Halliday and a Hayley Cunningham brace.

Hamilton Accies also found their goalscoring form this weekend, hitting Falkirk for seven to leave the Bairns rooted to the bottom of the SWPL.

Aberdeen got their second win of the new season, as they defeated Kilwinning 2-1.

Scotland star Julie Fleeting struck for Kilwinning, but the Dons responded through a penalty from Rebecca Dempster and sealed the win with a goal from Nikki Wright.