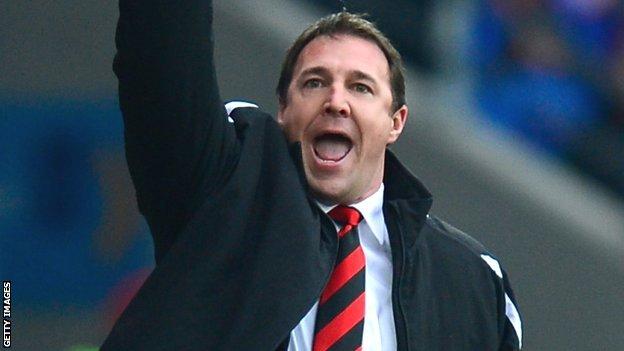 Cardiff City boss Malky Mackay praised the quality and spirit in his squad after restored their seven-point lead.

The Championship leaders had stumbled on Saturday with a but roared back at home.

"We made fresh changes, got fresh legs on the pitch and they certainly took their chance," said Mackay.

"It's what a squad's all about, it's about the squad we've got this year in terms of there being more quality to the squad rather than some of the youngsters who were having to come off the bench last year.

"We were one of the few teams in the division that played two games in three days and I think you saw that from Blackburn as well, they had to change men as well.

"Nowadays the pace and the ferocity of the league means that two games in three days is nigh impossible."

Mackay is delighted with the mentality of his squad, which he says has retained a strong camaraderie despite the fierce competition to make the matchday squad.

"I've got a squad here that are fighting for the jersey and fighting to get on the bench even - there's a couple that aren't even getting on the bench at the moment," added Mackay.

"So it's about making sure that everyone is hungry and everyone realises that when they do get the chance they've got to keep it.

"They've been exceptional all season in terms of their 'togetherness', playing for each other and guys who have been on the bench and had to wait and eventually been given their chance.

"But what I said to them was everyone in the squad at the moment are players I want to be at the football club and, that being the case, there will be a chance for every one of them.

"Everyone will have their part to play in the next seven games."

Having reestablished some breathing space at the top of the table, Cardiff next face a trip to third-placed Watford - Mackay's former club - on 6 April.

However, the Hornets must go to second-placed Hull City on Tuesday evening and those two games are likely to have a significant impact on who finishes in the two automatic promotion places to reach the Premier League.

"It's easy to say [winning at Watford], it's not quite as easy to do," said Mackay.

"They've been doing very well this season.. they're a great club and there's some fantastic people that work there that I know very well.

"So it'll be great to go back there on Saturday night... it's one that we'll be really looking forward to."