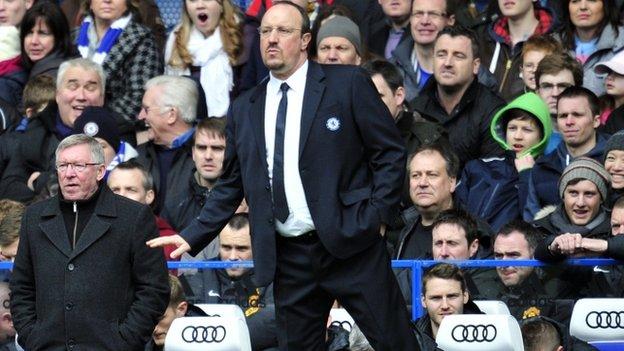 Rafael Benitez might have thrown a few extra eggs into the pudding by describing Chelsea's season so far as "great" - but suddenly things are not shaping up quite so badly for "The Interim One."

Even Benitez's critics at Chelsea, and you do not have to look far to find them, cannot lay blame for their Champions League elimination at the Spaniard's door as they were effectively out when he succeeded Roberto Di Matteo.

So this left Benitez with the task of securing a place in the Premier League's top four and attempting to win the FA Cup, Europa League and Capital One Cup.

After a hard-fought, but just about deserved, FA Cup quarter-final win against Manchester United three of those targets remain within Chelsea's reach and Benitez's remit.

Best and worst under Benitez

Being a personality that encourages extreme reactions, he was wasting his time suggesting there should be some measure applied to the Blues' progress throughout the season.

Balance and Chelsea do not belong together so Benitez can forget that. Examine the facts, though, and they suggest he may yet leave those at Stamford Bridge who have railed against his presence from the moment he walked through the door something to remember him by.

They remain in the top four, have now secured an FA Cup semi-final against Manchester City for the right to face either Wigan or Millwall in the final, and have a winnable Europa League quarter-final against Rubin Kazan on their agenda.

No-one can suggest Benitez is shaping up for a blaze of glory because failure to qualify for next season's Champions League would undermine everything and would be a wound that could not be healed by any silverware, even though that would not harm his own CV as he seeks his next post.

For all the enjoyment a trophy might bring, it would actually do Benitez more good than Chelsea. The season will be judged in the framework of Champions League qualification but at least there is still the promise of something tangible at the end of this most uneasy of arranged football marriages.

Benitez was able to revel in the sound of silence at Stamford Bridge as he overcame his old rival Sir Alex Ferguson (yes there was a handshake) to leave United with only the formalities of completing a 20th title triumph to occupy them for the remainder of the season.

He was not the recipient of a single approving cheer or comment for the victory but there were no banners to be seen and no abusive chants to be heard. In other words, as good as it is ever going to get for Benitez as he comes to the close of his time at Chelsea.

And his body language, especially in the second half, gave the lie to those who suggest he is passing through without a care for the club.

Benitez, on the basis that he is many things but not daft, will have known what would have awaited him had it gone wrong against United after fielding a weakened team in what may yet prove a crucial league defeat at Southampton.

He left John Terry, Frank Lampard and Fernando Torres on the bench at Stamford Bridge and came out on top - so perhaps, quietly under their breath, Chelsea fans may just be pleased with their manager's day at the office.

The first 45 minutes looked like leftovers from players who had played 48 hours earlier, or less in Chelsea's case. Dull and lifeless, it only emerged into the light in the second half, illuminated by two moments of undisputed world class.

Chelsea's winner came four minutes after the restart. Juan Mata's vision and precision to find Demba Ba was matched by the striker moving off Rio Ferdinand's shoulder to show perfect technique, athleticism and timing to hook a right-foot finish past David de Gea.

Just as crucial as the goal was a piece of breathtaking brilliance from Blues keeper Petr Cech on the hour mark that drew instant comparisons with all the great saves. When Javier Hernandez applied a flying header to Danny Welbeck's cross at the far post and directed it high and back across the goal, Cech seemed to defy all logic by arriving in time to stretch out a hand and turn it over the top.

Words cannot do full justice to the magic of the moment. Hernandez smiled in the knowledge he could not have done better and with a nod of appreciation to the keeper. It revived memories of Cech's save against Andy Carroll against Liverpool in last season's FA Cup Final - but the immediate instinct was that this was even better.

So Benitez relied on that quality but he was also deeply involved in his technical area. Tic-tac to players in all parts of the pitch, instructions and hand signals that meant nothing to his team but perhaps calmed his own anxiety, and frantic tactical adjustments as the game entered its final phrase.

Of course victory over United and Ferguson means much to him but he looked involved as Chelsea manager as well as on a personal basis.

For all his calls for balance, Benitez will know his time at Chelsea moves on a match-by-match basis. This was a good one - and there may even be better ones ahead.