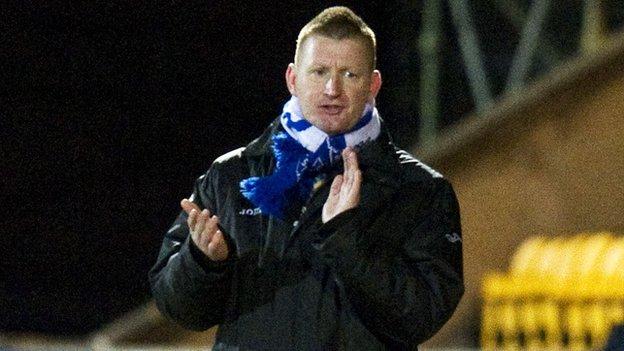 St Johnstone manager Steve Lomas is delighted his side will be playing in the top half of the Scottish Premier League after it splits.

Liam Craig's injury-time equaliser earned the Perth side a draw against Dundee United at McDiarmid Park.

The point was enough to seal a second successive top-six finish for his side.

"It was a delightful moment. We'll enjoy it, two years on the bounce, this group of players have made the top six," said Lomas.

"It's a fantastic achievement for them, but we want to march on now."

However, the Northern Irishman was keen to emphasise there will be no slackening off from his players, with a European place still very much up for grabs.

"We've got a huge game coming up against Inverness, who I watched against Hibs, and they dismantled them on Saturday," he explained.

"So, we will have to play like we did in the second-half [against Dundee United] for 90 minutes if we want to go there and get something.

"It's set up nicely, and we're looking forward to it."

The St Johnstone boss also asserted that his side's three-week lay-off from matches had contributed to a lacklustre first-half performance from them.

"I thought, first-half, there wasn't much between the two teams," said Lomas.

"They probably outworked us, and we probably looked like a team that had had three weeks off.

"That being said, the pitch is an absolute disaster to be trying to play any sort of football on.

"I felt the second half was a lot more like us - we passed with intensity."

Lomas also admitted he had worried that, as his side missed a series of chances, an equaliser might not come.

"It does goes through your mind that you think - it's not going to be your night," he said.

"But, all credit to the lads, they kept their composure.

"It's very easy, when you get those chances and miss them, your mentality is 'it's not going to be your night' and the lads didn't let that happen."

Goalscorer Craig, who is leaving Saints at the end of the season to join Hibernian, was also praised by his manager.

"That's why Hibs want him," added Lomas. "Even when he doesn't play well, Liam gives you everything, he's a model professional."