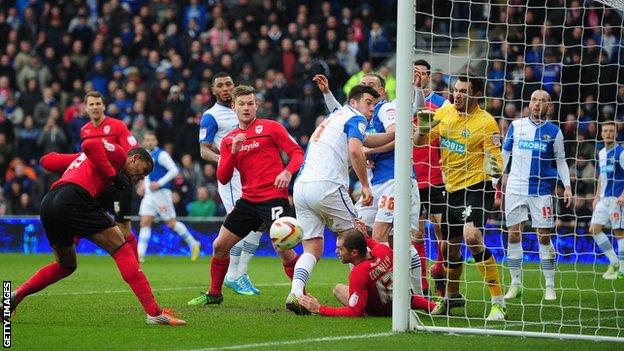 Blackburn caretaker manager Gary Bowyer has urged his players to remain calm after they slipped firmly into the Championship relegation battle.

Speaking to BBC Radio Lancashire, Bowyer said: "We can't get excited if we pick up a couple of wins because it's going to go right to the wire.

"We've just got to remain calm and positive, and keep going."

Blackburn are expected to be without 22-year-old goalkeeper Jake Kean, who was stretchered off with a knee injury early in the second half at Cardiff, for the remainder of the season.

The form of youngster Kean, who replaced ex-England international Paul Robinson as first-choice keeper in December, has been one of the few bright spots for Rovers since the turn of the year.

"I was shocked. I did expect a lot more from a club that's on the slide and in a relegation battle. The 200 or 300 fans that were here today are better people than me because I couldn't sit and take that - not just the spectacle of the football but what is going on at boardroom level."

And on-loan striker DJ Campbell has returned to QPR for treatment on a broken foot, which has prematurely ended his campaign.

The 31-year-old failed to score in any of his seven appearances for Rovers, the last of which came at Bolton on 5 March.

Blackburn, who on 19 March, have failed to win any of their last nine league matches.

But they lost for the first time in six outings under reserve-team coach Bowyer, who has been this season.

"It doesn't feel very nice [to experience defeat] and the players didn't like the feeling after the game," added Bowyer.

"We said at half-time that the standard of our play was not to the level that they can perform.

"We had more of a go at it in the second half and with a couple of minutes to go we were still in it. The second goal [from Joe Mason] was a sucker punch."