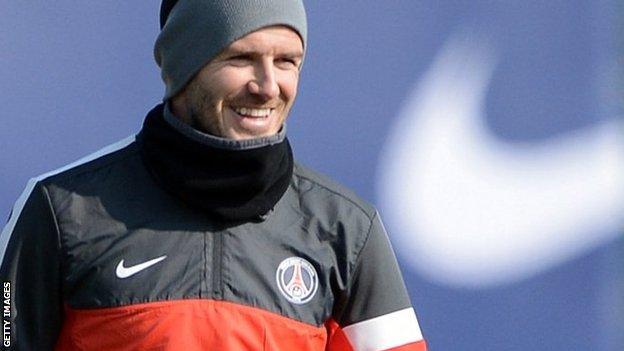 Former England captain David Beckham says he has not given up hope of playing for his country in the future.

The Paris St-Germain midfielder told CNN: "I'm almost 38 so the chances are very slight, but you never know."

Beckham is England's most capped outfield player with 115 caps, but has not featured since October 2009.

"One of the reasons I never retired from the England team is because, if there's ever an opportunity to play for them again, I'm available," he said.

Beckham is in the PSG squad for the home leg of their Champions League quarter-final with Barcelona on Tuesday.

At the end of January, Beckham joined PSG for the rest of the season, following a five-year spell in the United States with Los Angeles Galaxy.

"If there is any chance of me ever playing for my country again, I would never turn that down," he added.

The former Manchester United and Real Madrid player has mainly appeared as a substitute for PSG, but the club have said they want to keep him beyond his current contract.

Club president Nasser Al-Khelaifi said: "As a man, player, ambassador, he is exceptional."

PSG team-mate Zlatan Ibrahimovic, 31, said Beckham's move to the French club has already been a success.

"He has a big impact on the team, he has a lot of qualities," the striker explained.

"He is a winner and he has a great feel for the ball. He brings us his experience of big matches. He's also a player with a big heart, who has won a lot of trophies."