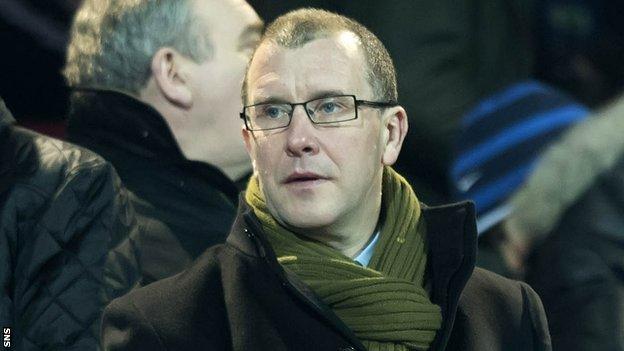 A majority of fans want a larger top flight, according to the first Scottish National Football Survey.

the findings are published at a time when the country's two main league bodies are considering league reconstruction.

Clubs are assessing proposals for a 12-12-18 set-up, with the top two divisions splitting into three tiers of eight midway through the season.

and, if approved, members of the Scottish Football League will also decide whether to change the make-up of the senior leagues.

"Naturally, league reconstruction is the hot topic among the supporters at the moment and while the numbers remain subjective, the overwhelming majority of fans believe a single league body, fairer financial distribution and pyramid are essential in any reconstruction process," said SFA chief executive Stewart Regan.

"While ultimately it is a matter for the league bodies to decide on, the feedback from supporters is in line with the Scottish FA's view and I am sure the results of the report will be taken on board by the respective bodies."

In the survey, 87 per cent of fans said they wanted to see a top division made up of more teams.

It also found that the men's national side was regarded as "seriously underachieving" while the women's team is "performing as expected or overachieving".

The women's team narrowly missed out on a place in this summer's Uefa Women's Championship.

"The survey has shown that the success of the national Men's A Squad is inextricably linked to the perceived success or otherwise of the Scottish FA as the governing body," said Regan.

"This has been a traditional perception that we have worked hard to dispel and we will continue to promote the other areas that come under our jurisdiction: Scottish Cup, performance strategy, grassroots development, referee development, compliance and club licensing to name just a few of our focus areas."

There was little agreement among the near-7,000 supporters who took part in the survey over what was considered an ideal fixture calendar.

The current August-May season received the most support (39%), with July-May with a winter break (30%) and March-November (28%) the other popular choices.

"In general, the National Football Survey has provided us in the first year with some excellent baseline data from which the Scottish FA, the league bodies and Supporters Direct Scotland can shape future objectives and measure the success of our existing and ongoing strategic goals," added Regan.

"I would like to thank all who participated in what will become an annual survey."