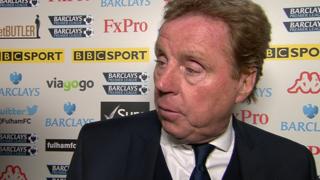 Manager Harry Redknapp says QPR conceded "the most terrible goals I've ever seen since managing a football team" in their 3-2 Premier League defeat by Fulham.

Dimitar Berbatov scored twice and Clint Hill added an own-goal as Fulham raced to a 3-0 lead as Rangers "dropped off" and "played too deep".

Redknapp says his side "murdered" Fulham in the second-half after Adel Taarabt's 45th minute goal roused the visitors, for whom Loic Remy added a second shortly after having his penalty saved by Mark Schwarzer.