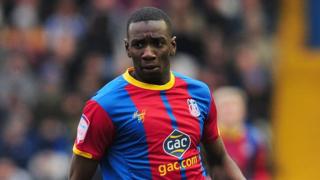 Crystal Palace winger Yannick Bolasie tells Late Kick Off's Leon Mann how he improved his skills by dodging the swings, slide and roundabout in the playground opposite his mother's house.

You can see more from the Eagles wide man in episode four of Late Kick Off London and the South East via the BBC iPlayer.

Sri Lanka rebuild and move past 300 after England's early wickets