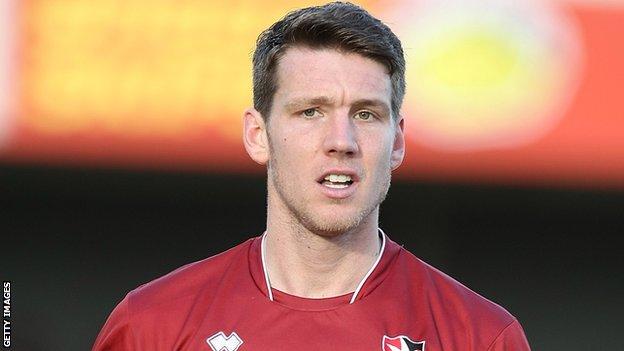 The Shots let a 2-0 lead slip but Goulding came on to head the winner and put the club two points from safely.

He told BBC Surrey: "If we hadn't have got the winner it would have been demoralising in the changing room.

"We have put ourselves right back in the mix and it is all to play for. Every game is a must-win. We are in a position where it has come to that."

The victory ended a run of six games without a win for the Hampshire club, who have a game in hand on six of the seven teams above them - and all of them are separated by just four points.

"It seemed it was going to end in a draw, but I guess that sometimes someone is looking down and that was the way it was," the 28-year-old said.

"I don't think there is a better time to score a winning goal than in the last five minutes. The boys worked so hard for it and it was a relief.

"We showed we have got more than enough to score goals and win games. We have got five games left and it is in our own hands."

The goal was Goulding's first since he moved to the EBB Stadium in February following his departure from Cheltenham.

"Sometimes as a striker you are waiting for the first one and then you can kind of relax a little bit," he added.

"Obviously the timing that it came was perfect. It was nice to get it but we definitely needed it.

"Sometimes in football you need that little bit of luck. We got a win and it was just what we needed."