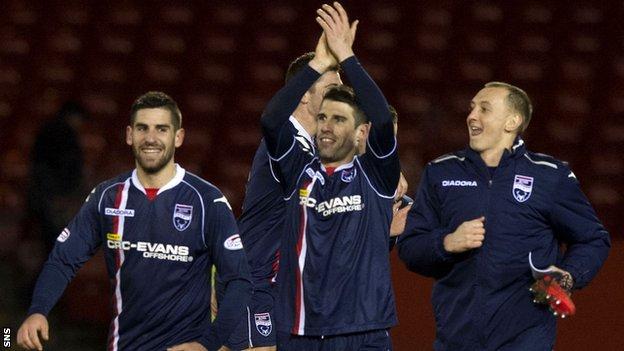 Ross County manager Derek Adams hailed "a truly magnificent season" after his side were guaranteed a place in the Scottish Premier League's top six.

ensured Saints and County will be in the top half when the league splits later this month.

"From our point of view, it was about staying in the SPL," said Adams.

"We've been able to secure a top-six finish in our first season and that's more than we could've asked for."

Adams led County to First Division championship success last season and the Dingwall side soon established themselves in the top flight.

January signings like Steffen Wohlfarth, Evangelos Ikonomou and Ivan Sproule boosted the squad and County have lost just twice in 2013.

"As the season's gone on and we've gathered momentum and points, we got to a stage where we wanted to secure a top-six finish and the players and the staff have been able to do that," Adams said.

A European place is still a possibility for Ross County but Adams insists the two teams above his are favourites to qualify for next season's Europa League.

"Motherwell and Inverness are doing really well," he explained. "They [Inverness] sit five points ahead of us. The two teams are on good runs of form.

"It's great that both [Highland] clubs have secured a top-six position. I'm delighted for Inverness and Terry Butcher because they've had a great season also.

The extra income generated by such a high league placing will help Adams extend player contracts.

And he added: "We'll try and keep the majority of the squad that is here this season and we'll have to add to the squad over the summer as well."