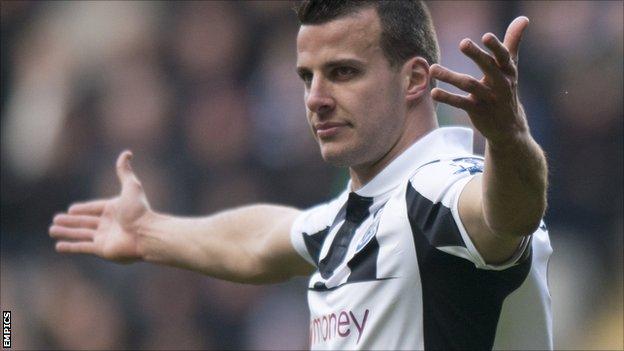 Newcastle United defender Steven Taylor has called on the side to play with confidence in their last seven games to ensure their Premier League survival.

The Magpies lie three points clear of the relegation zone after Saturday's 4-0 defeat by Manchester City, only their fourth loss in 11 games.

"Hopefully we can put some results on the board and hopefully pick [points] up," Taylor told BBC Newcastle.

"If everybody around us can be confident, I think we'll be OK."

He continued: "We need everybody to be positive about us.

"Our form has been good since January since the new signings have come in, we need results on the board."

In addition to domestic commitments, Newcastle remain in the Europa League and have a quarter-final first leg in Benfica on Thursday.

Taylor was involved the last time United made it to the quarter finals of the competition in 2005, coincidentally when Benfica's city rivals Sporting Lisbon ended the north-east side's involvement with a 4-2 aggregate victory.

And with after a last-gasp goal from Taylor is now eager for the trip to face the Portuguese side.

"It's a massive game for Newcastle and hopefully we can nick a goal out there," Taylor continued.

"It's important to get that goal because the Anzhi game was advantage to them coming to St James' [after a 0-0 draw in Russia] and very difficult in the second leg.

"Hopefully we'll go to Benfica confident and playing better than we did against Manchester City."

BBC Newcastle have covered every Newcastle United game this season, including their Europa League campaign and have full commentary on all frequencies of the Benfica match this Thursday from 20:05 BST.