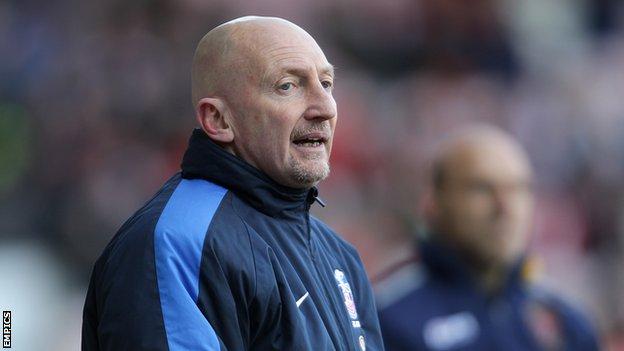 Crystal Palace boss Ian Holloway admits his side need a lift as they continue their bid for automatic promotion.

The Eagles have lost their last three games, conceding eight goals, and are now six points behind second-placed Hull, who have a game in hand.

He told BBC London 94.9: "You have to believe and the boys need a tonic.

"It's at the worst time of the season. We have got to keep going and see how many points we can get from now until the end of the season."

Palace followed a 3-0 defeat by fierce rivals Brighton with a 4-0 reverse at home to Birmingham and a 1-0 loss at Blackpool over the Easter weekend.

Despite being beaten by 10 men at Blackpool, Holloway was content with the reaction of his players to losing the two previous games, but he was critical of the playing surface at Bloomfield Road.

"I wanted us to be resilient and solid and look like ourselves and I think we did," he said.

Unfortunately Matty Phillips decided to hit one of his rockets that he used to hit when I was here. That was one of the biggest bits of quality all day.

"You get [to play against] 10 men on this pitch and is there an advantage? Not really. It [the pitch] is truly not good enough.

"We could have moved it quicker and earlier. We didn't really create enough chances with the extra man.

"Unfortunately, Matty Phillips decided to hit one of his rockets that he used to hit when I was here (at Blackpool). That was one of the biggest bits of quality all day.

He continued: "We have got six games left and I'm sure Blackpool would want to swap with where we are, points wise."

The match was the first time Holloway had returned to Blackpool following his decision to leave the Lancashire club to join Palace in November.

He spent over three years in charge of the Tangerines, winning promotion to the Premier League via the play-offs in 2010.

"I worked for Blackpool before and now I work for Crystal Palace,

"As a football supporter you never have to change allegiances or have to leave anything. It's always yours and it belongs to you.

"When you do a job like I try and do, your heart and soul is in it.

"What you want then is the reward; you want things to build, keep going, keep moving forward and for you to see the improvement around the place," he said.

"That's what I'm in it for and what I do it for. Whoever I work for gets all of me. Sometimes it works, sometimes it doesn't.

"I am very proud of how it worked at Blackpool. Three and a bit years was a fantastic time in my life - and it worked out well for Blackpool as well."