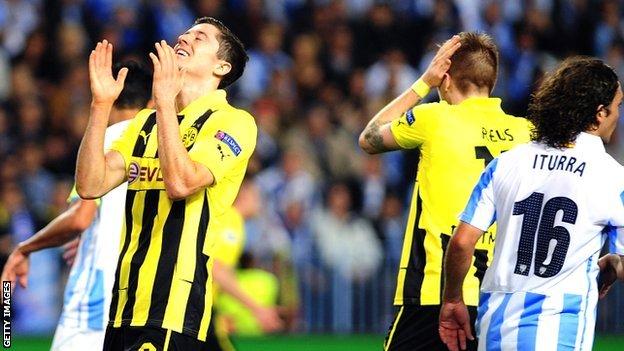 Borussia Dortmund wasted a clutch of chances as they were held to a goalless draw at Malaga in their Champions League quarter-final first leg.

Mario Gotze was the chief culprit for the Germans, twice denied by goalkeeper Willy after going clean through.

Robert Lewandowski's composure in front of goal also deserted him as he scuffed wide early in the second half.

Weligton's well-saved header and Isco's fierce shot were as close as the hosts came to breaking the deadlock.

Borussia Dortmund have failed to score on only two other occasions in 40 games this season.

They were held 0-0 by Stuttgart in the Bundesliga on 3 November and lost 1-0 to Bayern Munich in the German Cup on 27 February.

The stalemate is only the third time that a skilful Dortmund have been denied by an opposition defence this season, but it was their own failings rather than Malaga's steel that was largely to blame.

The Spaniards' presence in the last eight on their Champions League debut is based on a record of having conceded only twice in five European matches at the Rosaleda this season.

But there was little sign of that solidity when Lewandowski's flick-on from a routine long ball left their defence in tatters in the early stages.

Gotze scampered into acres of space but his tame shot was comfortably snuffed out by Willy.

I could have really helped the team by scoring. I'm ashamed that I didn't.

It was the best, but far from only, opening for Dortmund as Malaga's Jeremy Toulalan and Manuel Iturra struggled to protect their back four from cunningly angled runs in the first half.

Gotze thumped a shot into the goalkeeper's body after a smart reverse ball from Ilkay Gundogan before Marco Reus's finish failed to match the snappy exchange of passes that preceded it.

However the visitors occasionally came close to creating a goal at the other end with lapses in their defensive concentration often Malaga's likeliest source of a goal.

Javier Saviola was only a whisker away from Isco's weighted through-ball after Reus's mix-up with Marcel Schmelzer before Roman Weidenfeller was relieved to find team-mate Felipe Santana as the closest man to him after fumbling a low cross.

Dortmund coach Jurgen Klopp had warned his side of Malaga's physicality and, without injured centre-back Mats Hummels, they were tentative as Weligton's bullish header drew a good save from a corner at the end of the first half.

Top of the stops

The hosts' enthusiasm and energy for closing down seemed to fade as the second half wore on but the opening goal that seemed close never materialised for the Germans.

Lewandowski and Gotze both swiped shots wastefully wide, and after well-hit efforts from Isco and Toulalan had both been dealt with by Weidenfeller, Malaga's ambitions were focused on seeing out the game without conceding an away goal.

Francisco Portillo's introduction for Saviola shored up Malaga and substitute Julian Scheiber's wild shot after beating Martin Demichelis left Klopp without the comfort of an away goal before 9 April's return.

"We found what we expected to find, a team with players who are very good with the ball. Both sides went for it tonight and it made for a good open game.

"I don't think the game in Germany will be too different from tonight, only an early goal for either team could change things."

"I can live with this 0-0. We did everything well from the first kick to the final whistle but it's a higher level.

"We know what we have to do in the return match."