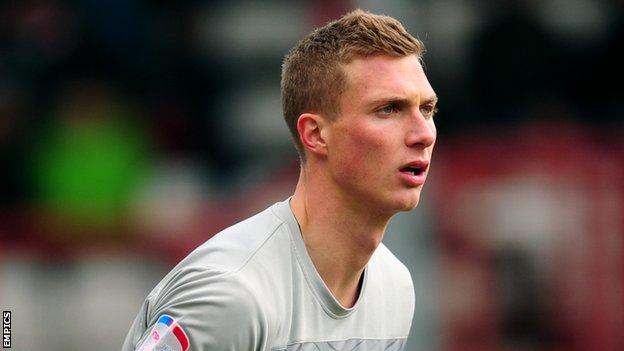 Brentford manager Uwe Rosler has refused to blame goalkeeper Simon Moore after their defeat to MK Dons, which leaves the Bees third in League One.

Dean Bowditch's long-range strike slipped past the 22-year-old for the opening goal in the 2-0 loss.

Rosler told BBC London 94.9: "Simon has been terrific for us the whole season.

"He is a young player who is allowed to make mistakes, although hopefully not too many. I will not blame him at all as he has been fantastic."

Internally we will analyse the effort, the desire, the quality and the performance given by each individual player

The defeat ended a run of three straight wins and the Bees are now three points behind second-placed Bournemouth, but with two games in hand.

Rosler substituted on-loan striker Marcello Trotta at half-time and top scorer Clayton Donaldson in the second half, and the German says he will make sure each player pulls their weight as the promotion race reaches a climax.

"I will be responsible for the result. I was disappointed with one or two players but the majority did very well.

"I will not analyse each player in public but there is a reason I make substitutions.

"Nobody will be blamed in public, although obviously in the dressing room I said what I had to say.

"Internally we will analyse the effort, the desire, the quality and the performance given by each individual player."