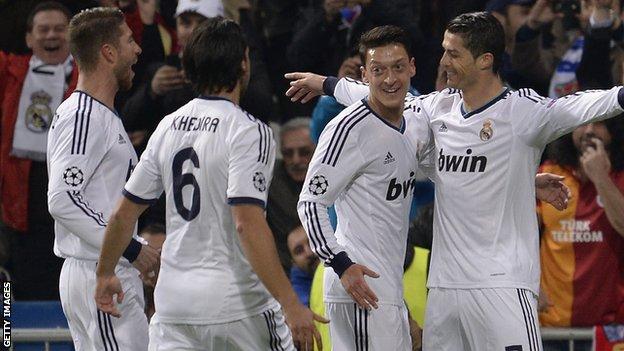 Real Madrid took a huge stride towards the Champions League semi-finals by brushing aside Galatasaray in the first leg of their quarter-final tie.

Karim Benzema deftly controlled Michael Essien's cross to stroke in the second, before substitute Gonzalo Higuain nodded in after the break.

Galatasaray were far from outclassed in the opening 70 minutes and created a number of decent opportunities, particularly in the first half, as they searched for a vital away goal.

Real Madrid are aiming to be crowned European champions for a record 10th time. They have not won the Champions League since Zinedine Zidane's stunning volley beat Bayer Leverkusen at Hampden in 2002.

But a lethal combination of Real's array of attacking talent and three defensive lapses proved the difference.

Higuain put the gloss on a comfortable home display at the Bernabeu and left Galatasaray facing a monumental task in the return leg in Istanbul on 9 April.

Going into the tie Real boss Jose Mourinho had stressed the importance of Champions League success after conceding the Primera Division title was beyond his side - they trail leaders Barcelona by 13 points.

And his team, aiming for a record 24th semi-final appearance in Europe's premier club competition, made the perfect start against Galatasaray.

Ronaldo latched on to Mesut Ozil's perfectly-weighted through ball and almost nonchalantly lifted the ball over a helpless Muslera after only nine minutes.

Much of the pre-match build-up had centred on the meeting between Drogba and his former Chelsea mentor Mourinho, and the Portuguese boss must have been concerned when the Ivorian forged a clear sight of goal shortly after Ronaldo's opener.

Galatasaray striker Drogba brushed aside home defender Raphael Varane to turn on the edge of the Real penalty area but could only fire wildly over the crossbar.

Galatasaray's defeat means a Turkish team is still to win a Champions League tie on Spanish soil after 13 attempts.

But Galatasaray were left to rue those missed opportunities as Benzema doubled Madrid's advantage.

Essien swung in a deep cross from the right flank and Eboue inexplicably ducked away from it, allowing Benzema to kill the ball before placing a firm shot inside the near post.

Former Arsenal defender Eboue could have made amends moments before half-time, only to fire straight at Lopez's legs after playing a neat one-two with Drogba.

Galatasaray boss Fatih Terim sacrificed attacking midfielder Wesley Sneijder for central defender Gokhan Zan at the interval in a bid to provide a more solid platform for his team.

The switch enabled them to stifle Real's attacking intent, but also deprived them of an effective link between their midfield three and strikers Drogba and Burak Yilmaz.

Clear-cut chances had been rare after the break before Xabi Alonso's deep free-kick picked out an unmarked Higuain - the Argentine striker heading his first Champions League goal of the season.

Real take what looks like being a decisive advantage to Turkey for the return leg, but will be without Sergio Ramos and Alonso who picked up suspensions after receiving their second bookings of the competition in the closing stages.