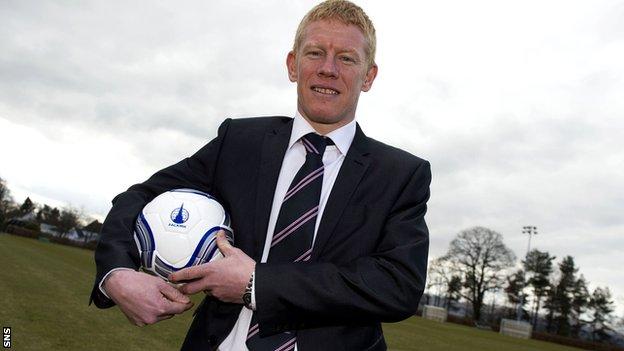 Former Kilmarnock and Scotland midfielder Gary Holt has been confirmed as the new Falkirk manager.

The new boss will take over on Monday, meaning his first game in charge will be the Scottish Cup semi-final against Hibernian on 13 April.

"It's an exciting move for me," Holt told the club website. "I was particularly attracted to the infrastructure and academy set-up."

Caretaker coaches Alex Smith and Stevie Crawford, who will oversee Saturday's home match against Cowdenbeath, will stay at the First Division club, with Smith likely to return to his role as technical director.

Holt spent six years at Kilmarnock during a career that took in stops at Norwich City and Nottingham Forest and was also capped 10 times at international level.

He arrives in his new post after coaching for three years as assistant academy director at Norwich.

"I've worked under some good managers and learned a lot," he said. "Their advice was always the same - get your coaching badges and work hard. That has proved to be correct.

"As time went on, I felt that after three years good experience as a reserve and youth coach, I was ready to make the move into management.

"It was a case of finding the right club at the right time so I am delighted that I have the opportunity to coach Falkirk at this early stage of my management career."

Chairman Martin Ritchie told BBC Scotland: "What we were looking for was someone to continue the work of bringing young players out of the academy and getting them in the first team.

"But we were also looking for somebody who was very determined, very ambitious, and somebody we felt could take us on and get us back up to the SPL."