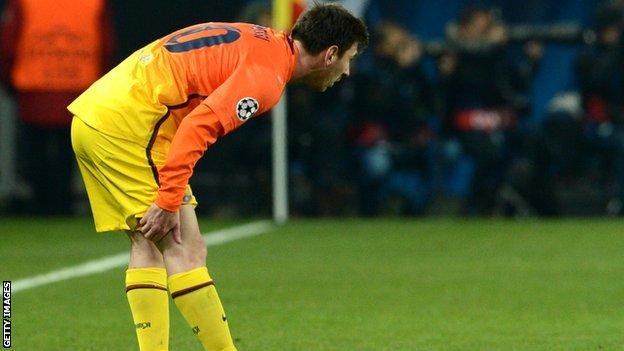 Lionel Messi could return to action in time for Barcelona's Champions League quarter-final second leg against Paris St-Germain on 10 April.

The Argentine forward, 25, was substituted at half-time with a hamstring injury during Tuesday's first-leg 2-2 draw in Paris.

He scored his side's opening goal but suffered the injury minutes later.

However, Messi said on his official Facebook page: "I will return soon. Thankfully it was not so serious."

A Barcelona statement said he would miss Saturday's game with Real Mallorca, but "his availability after that will depend on how the injury progresses".

Lionel Messi's goal was his 59th in the Champions League, second to all-time leader Raul's 71.

Messi, who also suffered a bloodied left knee against PSG, was replaced by Spanish international Cesc Fabregas for the second 45 minutes in the French capital.

Initial reports in Spain speculated that Messi could be missing for up to 10 days, which would have ruled him out of the return at the Nou Camp.

Messi's absence from the Mallorca game brings a premature end to his incredible scoring streak in Spain.

At the weekend, Messi became the first player to score against every other side in the Spanish top flight in successive matches after netting for the 19th consecutive league game.

In addition to Messi, Barcelona had Argentine defender Javier Mascherano taken off on a stretcher after 84 minutes with an injury to his right knee.

Barcelona assistant coach Jordi Roura said Mascherano "will be out for four to six weeks", ruling him out of the second leg.

"I think it was a typical quarter-final and a good result, but we deserved better," said Roura.

"And it comes at a price because we have lost Messi as well as Mascherano."