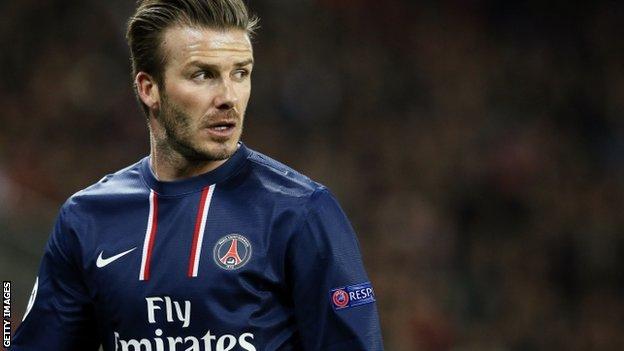 Paris St-Germain's David Beckham is relishing being back in the Champions League after playing in the competition for the first time in three years.

The 37-year-old lasted 70 minutes of in their quarter-final first-leg meeting.

In doing so, he became the first Englishman to play for four clubs in the competition.

"I'm enjoying being part of these nights again, they're very special," he told ITV.

The former England captain's last appearance in Europe's elite club competition came while on loan at AC Milan, in a 4-0 defeat to another of his former clubs, Manchester United, in March 2010.

Beckham said he did not feel he had suffered for his time away from the tournament since then.

"I feel pretty much the same as at Milan, it was only three years ago," he added.

"I was obviously very happy to start. The manager has always shown a lot of confidence in me, especially in big moments, and tonight was a big moment for the club and I was happy to start."

After ending a six-year stay with American Major League Soccer side LA Galaxy in December 2012, Beckham joined Paris St-Germain on a five-month deal a month later.

He has since made five appearances in the French League but Beckham would not be drawn on speculation that his form may earn a year-extension for next season.

"Let's wait and see. Let's recover from this game tonight and enjoy the rest of the season," he concluded.

He also played for Real Madrid in the competition after moving to the Spanish capital in 2003.